We Always Have The Rhythm Here 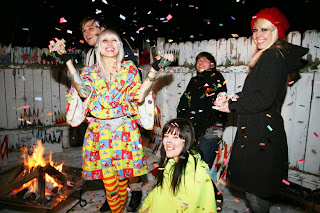 Tilly and the Wall
(photos by Jaimie Warren)

When I called Tilly and the Wall, the Nebraska quintet were stuck in the frantic circus of changing a flat tire in the whirl of honking horns, office buildings and a roiling Phoenix, AZ-heat, as they were checking out of a hotel. Just moving onto the next show; such is the tour life, driving all day so you can work at night, on the stage, flanked by glowing grins of 20-somethings, blithe and carefree, stomping and dancing to one of the more unique indie-pop/dance-folk acts around, which, as is always harped on, inventively features tap dancer (and singer) Jamie Pressnall as their main source of percussion.

It’s a lively year for the spry and fiery five, (with White on keyboards, Derek Pressnall on guitar, Neely Jenkins on vocals, bass and Kiana Alarid on vocals, bass); they released their third album O in June and a digital EP back in March, featuring the liberating trounce of bouncy 90’s dance club glory, “Beat Control.” They’ll also be touring the rest of the year, and continuing their beautiful relationship with their intrepid Team Love label (started by their fellow Nebraskan and friend, Connor Oberst of Bright Eyes.)

The sound is a crashing wave of thick triple harmonies over pounding and clanking footwork percussion, brazen brass, synthesized augmentations and high flying, gritty guitar lines, in flavors as varying as hyper French gypsy jazz to urban mariachi cruiser love songs, illuminating tremendous arms-raised invigoration with subtle dance sensibilities and sugary pop hooks cloaking an often biting commentary. Indeed, I note to singer Alarid that the whimsical naivety of their first 2 releases seems to have been a bit darkened by some of O’s diatribes:

“I don’t know exactly why. We all write separately, so I guess it’s just personal experiences everybody’s had. I don’t personally think anything we’ve ever done has been naïve, in a sense, I think it’s more that we’re hopeful people, that we are all aware the shit can hit the fan, but that everything will be okay, ya know, I mean, it has to be, there’s no other choice…” 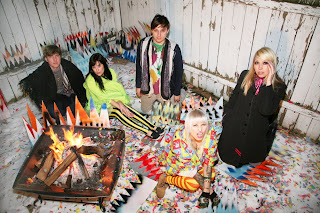 Indeed, but 06’s Bottoms of Barrels sang of “Let(ting) Us Be Free” while this sings of tides changing, and kids all learning when the bridges are burning.

“We never preconceive anything; we never have, so I don’t think that whimsical quality was planned, and I don’t think this (for example, the last lyric of O being, “fuck you…”) wasn’t planned.”

The smooth sinewy synths and arresting rhythms of Beat Control, which features the thesis ‘There is nothing stopping you / There is nothing stopping me /So let that beat control your body, baby,’ Alarid explained “The lyrics are purposely sort of vapid, because I wanted, literally, for the beat to control that song. So when I wrote that, I was thinking this song is not about thinking too hard, let’s just get together and forget everything else. It’s sort of extremely simple and also kinda literal; ‘don’t worry about it, let the beat control you right now.’ Right now, that’s all we want to do.”

Alarid, whose always been in bands, but never really sang or wrote, said that Tillification brought on much self discovery, for her and her band mates, and self confidence, particularly, is only rising: “We’re at the point now where we’ve changed so much, but that’s all since we’re growing up.”