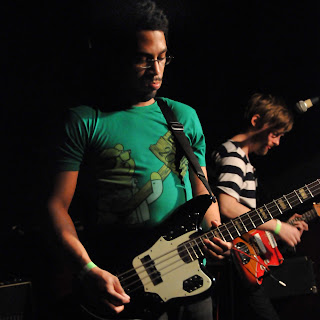 
(photos by Amanda Zee - taken at
the Blind Pig
last Spring,
for Detour)

Heavy Meadows is a beautiful, dreamy, hard-hitting statement, a meloncholic musing dedicated to the outdoors, the humid air, the soft grass; something close to an escapism record, or at least a mesmerizing summer album; warm and arresting, like some majestic sunset viewing put to vigorous rhythms and punchy beats and ornate spaced-out-n'-jangly guitars. Javelins have gone the extra mile on all fronts, evolving their earlier style blending rough hewn post-punk with new millennia-indie-dance grooves into literate, orchestral pop heightened by their ear for whirling futuristic breakneck rock – the melodies are often mystic and mellifluous, ricocheting off of gorgeous tripped out bending guitars riffs and synth serenades.

Featured here is a bit of catching up, via a Deep Cutz interview, with singer Rickle. 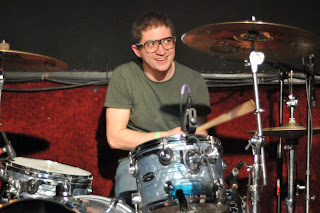 Milo/DC: There's been a few other big subsprawl releases lately (Child Bite, Pop Project), did that add any pressure to step it up? how did you approach the record?

Matt/Javelins: Well! It wasn't so much that we felt the need to step it up, it's that being accepted into a fold of such other incredible musicians was inspiring. The SubSprawl crew was something we were fans of when we recorded No Plants Just Animals ('05), and they heard the record and asked to put it out.
We were pretty new to "the scene" and when we did that record, it was not so much a band with big aspirations as it was 3 guys making something we liked. But this time around it's obviously different! I guess in the writing process your mind sort of opens up when you know that something is available to you. For instance, we never would have thought of putting trumpet on our first record simply because we didn't know anyone who could play it for us. So! Things like that.
And I think there is definitely a bit of healthy competition within our SSM group as well, I can't even count the number of times there has been when we're showing each other demos and someone is like "Holy crap, i hate you."! But the hate does not exist. It's only love baby.

DC: "...flowers, heavy meadows, the earth, blue horizons,"... heavy lyrics...(finding homes in the trees)...what inspired the nature/environment bending themes, or some of the more unique turns for you like the synthy strings coming in and making it all feel light and capricious on the title track (and did all the collaborations happen in-studio or was it mixed in?)

MW: Well, with those two songs specifically, it's funny, because one is written to a friend saying, you know, be optimistic about life and relationships, and then the next song is about me being absolutely miserable about those 2 things. But that's just life sometimes. The nature themes, though, are related in being that I find wide open spaces and the great outdoors to be lonely, sad places......much like finding yourself on the receiving end of a breakup. Plus! It's fun to speak in metaphors.
Shawn Knight's cover for the record couldn't be more perfect. As for the synthy(and real!) strings, we have Zach Curd to thank for that. I had the idea of songs 2 and 3 running together with strings, and while I had a specific idea for the beginning of "The Pounding," i didn't really have any melody prepared for the end of "Heavy Meadows." I think [Curd] really nailed it too, it works perfect for the song, the lyrics as you mentioned are a bit heavy on that one, but at the same time there is a playful absurdity to them, and the ending helps bring that out hopefully.
Had we written the melody it probably would have came out bit darker.
But yeah! That's why it works. We aren't usually such a serious band(cuckoo clocks), and like to keep things lighter.... Collaborations! Well, Zach was the only person that we collaborated with while writing, the string parts in "El Dorado" and "Heavy Meadows" were all him and he came out to Key Club to record them with us. Everything else was written by us and we asked our friends to play them out, which they did back home at Hi-Bias Studio, and Our Leisure Studio.

DC: did you have a ben gibbard-over-self-analytical-what will the fans think- type moment? ...for instance, is this a No Plants sequel, or it's own creature? did you think this album could be, to some or many, a proper Javelins introduction?

MW: Well, like I said earlier, when we did No Plants it was just us making tunes with no one watching, that's the beauty of being a new band. No expectations from anywhere. Now that we have a few people's attention.......it's something that we're aware of, but it never has freaked me out to any large degree. Something we don't want to do is repeat ourselves album to album. We wanted this record to sound more cohesive, so there are different themes running through it, lyrically and musically. The hope is to continuously morph our sound as we progress, and so any fan of our band could easily recognize a song as a part of that specific album. But yes! I think Heavy Meadows is a great introduction to our band! Come one, come all! We've been working on it for quite a while and couldn't be happier with what it's become.

MW: I'm really excited to see people's reaction to the record! I CAN'T WAIT TO GO ON TOUR WITH COLOUR REVOLT. That starts in a week or so! They are a great band and even better friends, so it's going to be a blast. You should seriously check out their new record Plunder, Beg, and Curse if you haven't already. Jesse has an insane voice. SO GOOD! 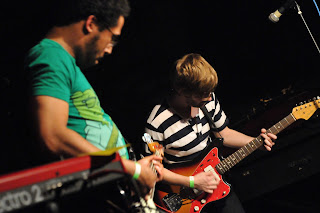