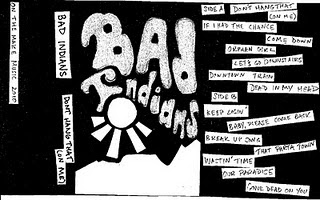 
This is one of the first responses uttered by Bad Indians singer/guitarist Jules Nehring, when pushed to "describe the sound" of his Ypsi-based quartet.

"If anybody asks, I say we play Rock and Roll. It's the only genre that really covers everything we try and do..."

What they've been trying, and often succeeding, -to do, is blend the raw tumble of Bo Diddley to the keyed-up tempos of seminal/spastic punk ...all dazzlingly dashed with a curtain of shimmering psychedelic fuzz.

It's telling that, when listing off his formative influences, he mentions "Link Wray" and "The Mummies" right next to each other.


What they've also been succeeding to do is release their dynamic oh-so-subtly-pop-tinged rock roars via a consistent parade of cassette recordings, passably produced, home-guerrilla-style, albeit it with the coarse charm ala lo-fi...

"I guess I don't really like how really produced recordings sound," Nehring said, "I'd rather listen to a 4track bedroom recording any day. "

Whatever it is - be it Nuggets nostalgia, surf rock splendor or maybe the innate allure of plaintive rock n' roll - these songs are stirring somethin' up in me...

The band (Nehring, Autumn Wetli--drums/vocals, Erin Davis--bass/vocals, Ian Lannen--guitar/vocals) are opening for Crystal Stilts, Saturday evening (5/21) at the Magic Stick - along with Oblisk and the Hounds Below.
Posted by jeff milo at 8:19 AM