Make it 'till you... (Single Barrel and the Prussia Passion Project) - tUnE-yArDs May 11 @ Crofoot

There's no sure fire answer, yet, as to how a band makes it in the music industry, post-Internet-reformation...

I like to think that no one really makes it, these days, and no one will 'make it' for a while to come. And I don't mean that to sound apathetic or jaded; indeed, I think the perceptual shift should be 'making it'...
There was a telling quote from the Fleet Foxes' Robin Pecknold, inside his recent Spin Cover Story Interview ~ "Our first album did ten times the sales that I'm even comfortable with," Pecknold said. (...which was more than 400,000 copies, not even a 'Gold' record by RIAA standards).

And then he subtle slips "I have zero aspirations beyond anything we've already accomplished."
That's damned telling of the new music world mindset.

Because by post reformation standards, Fleet Foxes have 'made it.'

Whatever it takes, however one gets there... Single Barrel Detroit is doing all it can to help Prussia make something. Make it somewhere, maybe?

But at the very least, they're 'making' four films together: a tour documentary captured on a band-traded flip-phone camera; a traditional "Single Barrel performance" set somewhere in Detroit; an elaborate, professionally produced Music Video...and a subsequent "making-of" said-music-video.
Listen...to the song that will eventually be put to film ->here.

"It's more of a passion-project" said Single Barrel producer and co-founder Jared Groth. "This was an opportunity to create something of serious quality for (Prussia)."

Single Barrel recently wrapped up a Kickstarter campaign raising funds to get this grassroots/DIY production off the ground. The SB team put up considerable funds, themselves; with the collective already being a pro-bono enterprise (98% of the time, at least). Director of Photography Mike Berlucchi pulled some favors and got an adroit crew together, and the Kickstarter helped nab a RED digital camera to give this Detroit based quintet of scrawny, shaggy souls "a cinematic presence." 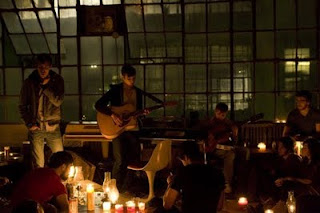 There were other contributors and eventual collaborators for this forthcoming music video - but it might reveal too much as to the overall aesthetic, if not certain plot-details, of the somewhat still 'top secret' music video. Needless to say, Groth was heartened and humbled by the willingness and enthusiasm brought by various members of the community, whether they be in music, in video production, or just open-minded/door-opening home owners (for one strikingly elegant set, rich with character).
Single Barrel Detroit is a collective of videographers, photographers, writers, designers and various other visionaries aiming to document Detroit's artistic and geographic architectural layout. People and places. The focus was "to preserve, as filmmakers and observers, what is in Detroit, what's left, buildings that are on the brink of being razed, and all sorts of really cool things that are here today and may be gone tomorrow...and hopefully will come back again."

To present Detroit's unique, fading locales, "with live music bouncing off the walls," Groth said. "to see how music interacts with those locations, or how the musicians interact with the locations."

They were careful not to tell just one side of one story, and particularly to work against the typical frames of Detroit, i.e. sensationalizing, or even masochistically romanticizing, the blight.

Last year, they filmed national (or, outside-of-Michigan) bands, that toured through, like Peelander-Z and Holly Golightly. But the web site mostly focused on Detroit music. "The hope is someone will come to (Single Barrel)'s site looking for a Holly Golightly video but stumble pon all the great music that's born from here..."

And, again, maybe there isn't a sure-fire answer to how one makes it. Or, even, just how one breaks through...and gets attention.

But a video can be a start. And that's something at which Single Barrel has more-than-proven it's adroitness.

Fancy pants sites like Pitchfork and Stereogum or whoever else is purring out the blog buzz, often feed on dynamic videos or even just bands that have share-able media packages.

This was a "personal project" for Groth, along with his co-producer and SB co-founder Andy Martin (as well as assistant producer Candace O'Leary), as "we've watched (Prussia) grow up over the last few years..." SB was born out of the production crew that hosted Phonotropic Friday night performances in the Vernor's Lounge at the Crofoot...for which Prussia was one of the earliest and seminal featured performers.

"They're in the moment," Groth said, "and they're sitting on an amazing album." Their Poor English still sits in a curious holding pattern, awaiting a proper "drop."

"We believe in them! We believe in their musicality and we believe they deserve attention for that. When (Poor English) drops, they're gonna get it. But we just wanted to do our part to make sure they had something visually that stood up to the album that they created."

SB's crew and contributors...just like any other band, just like Prussia, are balancing their creative passion, with their day jobs. SB shoots are "fun and free and nobody gets paid for it but what they get out of it in terms of enjoyment and experience and the ability to step outside the box and try new things...where as in their normal jobs, they couldn't do that. I think that's our payment."

The rock star died. Nobody's gonna go to the tippy-top like Green Day or Kanye West... We might have some Fleet Foxes or some Odd Future's here and there... But there's no shooting-star tail to hitch a ride on anymore....

SB and Prussia...and many others...

Single Barrel continues to create unique mini-documentaries and music videos at a steady pace. Groth, meanwhile, will be moving to Seattle this summer, but is committed to continuing his creative collaboration with Martin and O'Leary.


That said... my favorite album of the year, right now, is WHOKIL by tUnE-yArDs...
that's germane, because: