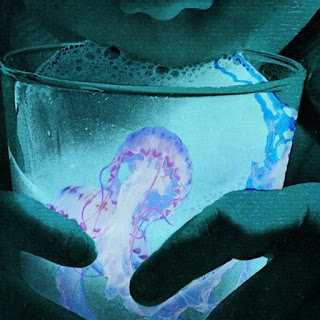 Jellyfish On Cassette is an instrumental "journey" for the listener, led by the mad scientist producers Blair French (Dial81) and Eddie Logix, joining together with their ambient arrangements under the project titled BLKSHRK.

This Friday, ASSEMBLE Sound in downtown Detroit hosts a listening party celebrating the release of this mind-expanding sonic excursion.

Eddie and Blair have composed an album evoking a sense of insular retreat and detached escapism... It draws the shades to block out the city's cacophony ...or it closes the eyes to seek out a lucid dream... It creates a feeling of safety and yet mystery... but it can also widen its peripheries, carry you somewhere like a kite in a gale, out into the  night sky's expanse, where the proverbial stratsopheres beckon....to envelop the entire nocturnal horizon, the soundwaves as waves wafting you away, the stars wreathed in a haze similar to the neon-turquoise luminescence of the cover...until the next song draws around you another gossamer curtain, and the swell, the oscillation, the melodic hum, the meditative churn....takes you somewhere else...

...I'm sorry, but that's what ambient music does to you. It sprouts ellipses, it uproots the mind and threads it up stream... And that's particularly the case with "Fin," a 29 minute slow-trance orbit with a coterie of cool, calming tones lilting like a midnight's blanketing of snow, cultivating and stimulating a loud quiet, a startling spaciousness, a dreamvision consciousness where your cerebral planchette begins to move across the oujia board of your mind at its own accord...

Logix has had some experience dabbling in the boundary-blurring lines of ambient instrumental compositions, but Dial81 garnered particular notoriety through the form with his soundtrack for the Detropia documentary.

"This is my first time really going this deep into the ambient music genre," Logix admitted. "But, that's one of the reasons why I wanted to work with (Dial81)." Logix, who helped mix and master some of Dial81's earlier ambient projects, including Detropia, admitted that the soundtrack to that documentary formed a lot of the influential bedrock for Jellyfish. "We both come from heavy hip-hop backgrounds, so a lot of our production philosophies are very similar, even when working on the more house- or ambient-esque type stuff. I had a lot of fun working on these tracks..."

The duo have called this project ambient, but also "blunted house...," a dirty beat-tape music made specifically, but not exclusively, for the cassette format. The tape, which you can check out this Friday night at Assemble Sound, is 60 minutes of original ambient music forged by two collaborative minds, musing on the mysterious inspirations sparked during sleep-deprived nights in Detroit, gazing into the night skies over the train station, stars mottled out by sewer grate smoke. Side A has eight 3-4 minute palatable tracks spanning the first 30 minutes while Side B is comprised entirely of "Fin..." What a trip.

The two completed the project with the listener's experience explicitly in mind. "Even the mixing and mastering was done in a way to allow for a better cassette-listen," said Logix. "But...digital is still pretty cool, too."

The release party (Oct 9) is supposed to be the ideal listening experience for the tape format, accompanied by projections, a light show and a special installation of floating jellyfish.

"Some of our favorite Detroit DJs are playing," Logix said, "and there's limited edition prints available along with the free digital download paired with the cassette tapes. It's going to be a super chill evening."

This album's been two years in the works; the first collaborative production between two of Detroit's most dynamic producers.

It's the debut release for Blair's new label, Fat Finger Cosmic, which focuses on tapes and vinyl with digital supplements.
vibes by ...DTCHPLNESTodd ModesFahrenheit 2040