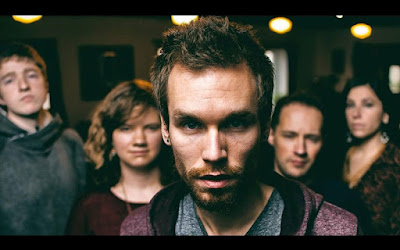 For this month's CURRENT issue, I got Chris Dupont to open up about his band’s newest album, Outlies and it wound up being one of those conversations that reminds you about how important music is in life.

Dupont can do that; the Ann Arbor singer/songwriter has spent the last five years re-imagining the folk aesthetic with a devastatingly soft brush of baroque strings and pianos under autumnal wistfulness strummed across his gutiar, with lyrics that punch the gut in slow motion and cathartically pluck the heartstrings (snapping a few, sometimes, after the third chorus). Dupont’s music manifests that startling quiet you feel come over you when you reach that clearing in the wood or if you’re out traipsing the cold Michigan lake’s shoreline at dawn. That’s just a taste of what to expect on Outliers, which comes out October 2nd.

The blend of electric and acoustic guitars, splashing together with this soft radiance over the steady pulse of the drums and pianos like soothing sighs, yes, it’s this kind of revitalizing folk music, the epilogue of emotional ravages, the soundtrack of the next sunrise. And we haven’t even touched on that voice, fragile and fresh, celestial and smooth. Let’s really open up…

Outliers songs sound more existential, lyrically; it’s like an outlier being out of one’s body or a view from a scene from backstage, singing as an outside observer…
Chris Dupont: Jeff, that’s a great take on Outlier! Yes, the idea of being an onlooker, being outside your own environment or even your own body, that’s definitely there. It’s a feeling I have often, and, I think it speaks to the mood of (Outlier). It’s almost as if I’m separating myself from my emotions, sorting them out, looking at them, reintegrating. I’m not sure that’s what I set out to do. I started realizing the title really described me as a person, and how I view the world, really. Not necessarily as an “outsider” or “rebel,” those imply something more active. It’s more a calm submission to being on the fringe. You can follow what everyone else wants for you, you can stay bitter for a long time, or you can accept your own oddities and do your best to live with what you've got. That's what a lot of these songs dwell on.

It’s not easy striking such a heartfelt frankness to one’s musical poetry like this, talk about sifting the heavy emotions to the top and what draws you to these poignant veins of folksinging?
Frankness. I love that word. Yeah, it’s tough being so exposed. It’s not necessarily embarrassing because I absorb these energies from people, whether good or bad, and then gravitate toward writing. Usually, the process of putting those thoughts to music and molding ideas into a narrative lyric helps me discover an insight that might not have occurred to me. I think that’s why a lot of my songs have turns or resolutions. Some of these songs and stories spur emotional reactions in people but that might cause them discomfort. That can make me squeamish; I’m that party host wanting every guest to feel great, ya know? But, I can only connect with that I’m doing if I believe it. Frankness is all I’ve got. I also draw lots of inspiration from my environment and the seasons. I try to set a scene; to really place people in the grey overcast valley of Ypsilanti, or in the woods when everything's frozen and dead.

Talk about what moves you, when it comes to music, like your influences and what it is you strive for when you record and perform with the band
I write a lot of my music when I’m in deep need of sorting something out. I love songs that make sense and feel like they’ve been there for a long time. James Taylor, Ryan Adams, Tracy Chapman…all wrote a bunch of those. I’m attracted to songs that could stick around and mean something new several years later. Outlier has a bunch of ‘jam’ sections but I think the songs themselves are actually simple forms with lyrics and melody leading the whole work. I was taught by my father, long ago: “don’t just be a guitar player; make the guitar sing.”

Chris Dupont starts the biggest tour of his career to support Outlier this month, which gets a national release on November 13 (iTunes, Spotify, Bandcamp). Look for Outlier on vinyl next January.


What other areas, vibes or forms did you explore with Outlier and tell us more about your inclination to include strings and that baroque style of playing…
I definitely always come back to fingerstyle guitar and string arrangements. I just never really get tired of it. On this album I definitely veered off into some pop territory, because it's nice to have some pay-offs, some higher energy work that really kicks. But I was taught by my father a long time ago, "don't just be a guitar player. Make that guitar sing." I want every guitar part to be a good platform for the melody, and to stand on its own if I play out by myself. I try to put melody and movement into the guitar, and play it like a piano. Partly because it's what I want to hear, and partly because I get bored if my tunes are too easy for me to play. And strings never cease to make something well up inside me. Katie VanDusen (violin, arrangements) takes my songs and always finds a way to pour tons of emotion into them, and some of her lines just make me want to cry for no reason. She makes the violin sing emotional content that the lyrics can't necessarily provide.

You've been playing out live here and releasing records in the SE MI scene for a while, what do you find most inspiring about it...or do you feel it has even more potential that it hasn't yet reached but could, very soon?
I love this scene, man. There are many little pockets, different communities of people doing different things, but they all seem to cross pollinate pretty well. I'm just inspired by all the cool things people keep doing. You've got Luke Jackson fixing everyone's guitar and building custom instruments. You've got Billy Harrington playing drums on EVERYTHING, and helping artists get out of their shells and make great work. He actually gave me the push to make this Outlier, so he's a big part of this project's life. I see a lot of artists teaming up on each other's records, and I think that's really important. It's how you grow.

I'm also excited about how many artists have really built their own scenes. There are lots of gig opportunities around here, but not exactly a plethora of venues. I've noticed that, instead of getting super frustrated, lots of artists around here just make the scene they want to see. Like those porch shows in Ypsi that J.T. Garfield hosts. Those are awesome. A really cool girl named Ilana Riback really wanted there to be a great open mic in Ann Arbor. So she went and started one, and it's done really well. Artists like Vince Colbert, Billy Harrington, Adam Plomaritas, and myself have all been known to rent venues when we have a specific vision for a show. You gotta be scrappy and resourceful around here I think.

Matt Jones is working on something that’s kinda all-encompassing for the Ann Arbor, Ypsilanti scene, with the River Street Anthology.
I could rave about that all day. What a cool concept. No budget, no tricks, Matt Jones is just inviting everyone, big name veterans and quiet bedroom artists who never gig, and having them do 1 or 2 takes of a tune in front of a hundred dollar mic. Just to have it. To record what's going on in Michigan. Get a snap shot. I actually did "Bedside," one of the tunes on Outlier, for that project. I'd been in studio non-stop, and it was so refreshing to just ditch the headphones, forget about Pro Tools, and just sing a song for Matt in a basement. Just like it was when we were all 17 in our punk bands. It felt real. I was so inspired by that session that I decided to record the album version all in single passes. I sang and played live into a reel to reel tape machine at Solid Sound, picked the best take, and then added more stuff, all single takes as well.

And of course, going back to your question, the scene could reach new potential. I'd love to see more venues in Ypsilanti. I miss Woodruffs. I think everyone here is scrappy, and they've found good ways to play out, but I'd love to see more sit-down, quiet venues. You know, a lot of my fans are in their 30's, 40's, and up. And what's funny is that most of them just want to sit comfortably, listen, and go home at a decent hour. There are a couple great listening venues in Ann Arbor, but I'd love to see more options that are accessible to developing artists.

What’s your future plans, rest of the year and beginning of next…
All kinds! I'm about to go on my biggest tour yet to support this record. I'm doing a release show at Towsley Auditorium on October 2nd. I love that room. It's a big theatre style space with a big stage. We're bringing our own sound and lights and putting on a big production. I've done a few gigs this year in rented rooms, and you can really curate the experience for people. It's going to be an amazing show.

After the tour, I'll stay close to home for much of the winter. The album releases nationally (iTunes, Spotify, Bandcamp, all that) on November 13. Up until then the only way to get it is at a show. We're going to do a vinyl pressing that'll come out late winter.

What are you most looking forward to…?
I'm excited to really push Outlier. And I want to do something bigger with it too. A lot of the tunes speak to some painful stuff like mental illness, suicide, and the like. But I don't just want to sing about it and shove the issue in people's faces. I'm talking to some other artists and trying to figure out how we can make this work tie into a movement or something that could encourage help for those who need it. I don't know what that even looks like, but I think that's the big dream at this point.


After that I think I have dreams of doing shorter scale projects. Like an EP that's all analog tape, or a short LP that's rockier and sounds way different for me. Why not?

http://www.chrisdupontmusic.com/
Posted by jeff milo at 9:33 AM