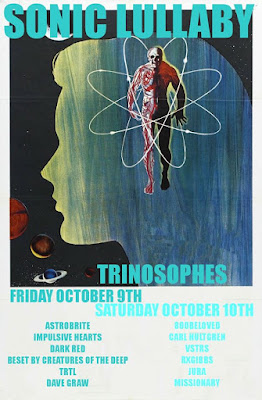 It was just shy of a decade ago…that Detroiters heard their first Sonic Lullaby.

Well, maybe not everyone in Detroit knew about it, as it was happening… You see, the whole point was to expand an interest in ambient music: experimental, sound-wave shaping pursuits wherein a melody would be smooshed or stretched, spread or slowly wound around itself like a mobius strip… Detroit, back in 2006, was a place for indie-pop, for garage-rock, for hip-hop, stuff that kicked… Ambient music didn’t kick, rather, it massaged or it assailed…it surrounded you or throttled you… It wasn’t something to dance to, it was (or is…) something more cerebral… Some of you might call it “druggy…” or “trippy…”

Paul MacLeod started the Sonic Lullaby after he and fellow ambient composers (from groups like Indian Guides) were discussing how to shine a more welcoming light upon this esoteric music and widen the circle for more ears to listen in on all these strange, sublime sounds… MacLeod joked that they should have a festival with nothing but ambient music, including covering the floor with mattresses so that they could lull everyone to sleep. Facetious self-deprecation aside…the burgeoning community of ambient-rock (or shoegaze, or whatever genre tag you’d like to apply…) were still mustering for more listeners, but it’s not like there were any stand-out darlings or champions of this scene, waving its flag… The idea behind Sonic Lullaby was that every ambient band’s unique insignia or sonic crest could be stictched onto one big, encompassing flag, fluttering for the whole scene to see (and hear) with each musician grasping an edge…

MacLeod took it upon himself, having never done anything like a festival before, to nonetheless arrange a program of music with a full lineup of bands…that was 2006…but on Oct  9 &10, Sonic Lullaby returns…

TRTL was for pieces of music he’d composed that didn't fit with what TACT was doing. He took the name off the back of a soy ice cream container since he didn't think anyone would ever see it. Because there’s actually an organization that uses that name, (and since he was never entirely happy with the moniker,) he changed it to TRTL in 2014. TRTL and Sea Turtle are at the core of every festival….since, essentially, they’re the reason why (Sonic Lullaby) began in the first place… “Without them,” MacLeod said, “I wouldn’t have started the festival in the first place…”

Now, after several Sonic Lullabies, an audience has begun to form, following the strangely enticing spells of ambient music. The hope, someday in the future, would be to take the festival outside…since this music lends itself to the open air….The vibe expressed by both MacLeod and musician Frank Lee (who’s helping out this year) is that they want these Sonic Lullabies to grow bigger, to get better…to be even louder (in a soft, swelling sort of way…). You get the picture, hopefully… If not, then we’ve got an enlightening Q&A with MacLeod and Lee, talking all about Sonic Lullaby 2015.

Alright, let’s work past these fixations over “genre…” Sonic Lullaby encompasses more than “shoegaze…”More than fuzz pedals or echo or delay or reverb…What does this fest embody...or encompass…or represent? A sound? A feeling?  A shared delirium?
Paul MacLeod: It's not just about shoegaze and never has been. It is based on a feeling created by all the music featured; mostly, dreamy and swooshy and beautiful. It's music to get lost in. It's music to be engulfed by. Its music to be experienced, not just heard.
Frank Lee: (Sonic Lullaby) is a celebration of an often ignored or maligned music.  From what I've read, you go back to the early 90’s, after the first few years of 'shoegaze' bands in the UK, Brit-pop was exploding and anybody with delay and reverb pedals or rack mount effect processors were viewed as a plague upon the land.  I'm too young to have known about it the first go-round, but I still remember when I bought Loveless and Souvlaki, or the day I picked up Nowhere by Ride and Raise by Swervedriver, and playing those CDs non-stop.  It definitely lead me into stuff that resonates with me still, be it Godspeed You! Black Emperor and Mogwai, or Harmonia and Earth.  While I love that music, there's not a ton of people I can share it with, so maybe something like (Sonic Lullaby) can bring attention to these styles of music and help connect the people who enjoy it.

Is there a broader conversation that this Fest can start... As if this were a gallery and the noises the bands made were framed art... Can attendees come and experience the throttle of reverb and scattered rhythms and come away with a new perspective on music? Is that one of the ...goals? ....of Sonic Lullaby?
Paul MacLeod: The goal of Sonic Lullaby and I guess …of all festivals …is to expose the audience to music that they wouldn't have been of aware of otherwise. Someone might come to see 800Beloved and walk away in love with Jura or Dave Graw. Something that they would have never known existed without this festival.
Frank Lee: Well, it would be nice to see more people embrace these sounds for sure.  Ultimately, if someone comes to this and sees something new that inspires them, then that would be the best possible outcome…and however they react to that, or what they take that inspiration and put it into I have no control over.

Frank, you were, and are…first and foremost, a fan of this festival, as well as a participant… Talk about your favorite experiences from past Sonic Lullabies to give folks an idea of what they can expect…
Frank Lee: Watching Scott Cortez of Star (who also plays in Astrobrite, a group on this year's lineup) playing guitar and using the broken off head of a hockey stick as a slide, …so calmly too, as if it was something every guitar player guitar does.  I also remember watching Sey Lui have some absolutely amazing sets, just destroying everything!  They were the only other local band besides Paik I knew of making epic instrumental music (Rob from Paik will also be playing this year's festival in his more recent project Dark Red).  Paul's done some amazing work with (Sonic Lullaby showcases), and honestly I have a hard time remembering DIY festivals like these happening in Detroit before he started these; it was very eye-opening to me.

What was the particularly exhilarating about these shows… Or how did it help you sort of weave your way deeper into this scene?
Frank Lee: (Sonic Lullaby) was where I was first able to see live ambient music, particularly with what Sea Turtle and Kindle were doing.  I was friends with these people, but watching them perform this music definitely made me appreciate it more.  And, these performances, along with many conversations with Jason Worden of Kindle and Indian Guides, are what led me into discovering some of Detroit's space-rock legacy, like with Burnt Hair Records out of Dearborn and bands like Asha Vida, and Windy and Carl.  These were people who played amazing shows with great national and international bands back then.  Unfortunately, as is usual with many Detroit bands, there was never enough support from the outside communities and a great legacy of music now sits like a dusty book on a back shelf of a library.

Paul, can you talk about what draws you to these sounds, this style, the dreamy, fuzz-drowned, wavy reverberations…
Paul MacLeod: I've always believed that the kind of music that you write actually chooses you, you don't choose it. The music that influences you the most is what’s going to come out of you, freely and truthfully. When I started purchasing music, a lot of what I chose were soundtracks, by Jerry Goldsmith, John Williams, John Barry, John Carpenter…. I also fell in love with Pink Floyd, who, to those that aren't familiar with ambient or shoegaze, is the band that my music is typically compared to... Those influences and the bands that I've discovered since then, like Slowdive, Windy and Carl, Godspeed You! Black Emperor,... all spoke to me and that's the kind of sound the festival tries to embrace.
Frank Lee: Music like this reminds me of things that are not often considered musical but can be very moving.  Sitting on a beach watching the clouds change and move in the sky, the sound of wind rustling through tree leaves in a forest, having your windows open while speeding down freeways, an orchestra of cicadas heard during summer on a back porch at 4 am, etc.  These are things that a lot of instrumental (or mostly instrumental music) replicates for me. As much as I can appreciate lyrics or words, being able to say something with sound probably is what I connect to the most.


What are you both stoked for, this year…what can we anticipate?
Paul MacLeod: I think that this year's lineup is possibly the best ever! No offense to those that have performed before….all the previous acts were incredible, but I am really excited to see everyone on this year’s bill. I'm really looking forward to Astrobrite's set! Scott Cortez's band STAR performed at the first Sonic Lullaby and I'm glad that he'll be back with his legendary Astrobrite project. Carl Hultgren of Windy and Carl is playing a solo set that is sure to be amazing…
Frank Lee: (It’s) a veritable metric fuck-ton of awesome!  Astrobrite is going to be killer, so is Dark Red; those guys are going to bring the melting fuzzy tones.  I definitely am stoked about Beset by Creatures of the Deep, they are pretty much a supergroup with members from Human Eye, Johnny Ill Band, and Electric Lion Soundwave.  Missionary has a lot of connections too, with dudes from Palaces and Isosceles Mountain.  Also, I know almost nothing of Dave Graw…but the music on his website is absolutely amazing.  Everybody is top notch.