This Fest is not a Fest...
I mean, you think "Festival" and you see large crowds, greasy food, scant parking, (threatened citations,) jutting tents and over-priced beer...

This is more like an Autumn-time party, a pre-Halloween hootenanny, a post-summer soiree, a Fest without all typical exasperating auxiliaries... 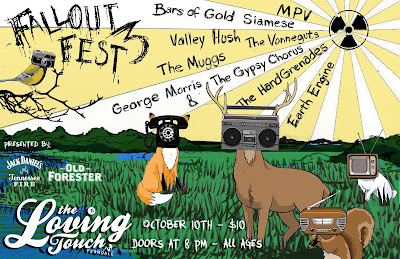 Two rock band dudes, John Morgan and Jesse Shepherd-Bates, started this festival two years ago ostensibly in reaction to (or as a lighthearted parody of...) how ridiculously vibrant and active this local music scene had become, in both the sheer number of bands but also in the present range and variety of genre.

Why not have a music festival forged to celebrate the bands -themselves, the music -itself... A night to let their already-long-hairs-down and raise a pint or two to all the work that goes into this tacit fun of rocking and rolling... And why not curate a killer lineup of talent? Shouldn't be hard in a scene like this...

The lineup is split between two stages, named in accordance with the theme of nuclear fallout...
...Co-headlined by The Muggs and Bars of F'-ing Gold, also featuring The HandGrenades (with Bates as a contributing member) and one of my new favorite bands, Earth Engine... (so get there early)