The bandwagon's idling at the station....this is your chance to hop on... 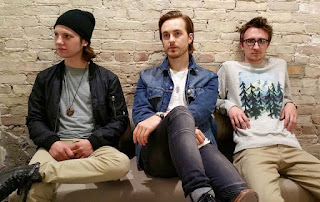 Shady Groves are a pretty much brand-new band here in Detroit. Their debut single just came out this morning.

The trio have a full-length album called Bitzer coming out in early 2016, but if you start following their soundcloud, you'll probably get a couple more singles streamed as previews throughout the forthcoming winter. Harmony-heavy, vocal-centric, ukulele-utilizing folk-pop, with tones as smooth as honey and cooing guitars (sounds like slide-guitar, almost) shearing in softly like the morning's first sunrays, but really, this is like anytime-o'-day music, kinda laid back and exquisite in its own way, affecting that traditional folk singer's furrowed and world-weary timbre yet not exactly tranquil (particularly with the lithe word-tumblings building up to that bridge).

This music feels like that certain invigorating ascension you might feel halfway through the hike, near the top of the hill, when you're feeling enthused and assured cuz you see that light through the clearing... Could stuff to stave off winter blues, I'll say...