The Blueflowers (Interview) Performing Saturday for a Very Gangplank Christmas

I caught up with singer Kate Hinote from The Blueflowers, chatting about the upcoming Gangplank Records Holiday Benefit Concert and a special Acoustic Showcase coming later on in Winter...

The Blueflowers make country-rock in the same way David Lynch once made a soap opera. The configurations and certain thematic elements are familiar but there’s something supernatural just below its surface, something bewitching pulling you into their sublimely shifted world of Americana-twang, like these could easily be ghost stories as much as they could be torch ballads.

The Ferndale-area sextet will rock a local label showcase (Gangplank Records) at The Loving Touch this Saturday as a way to cap off a very busy year that started all the way back at the end of 2014, when they released their most captivating album to date At The Edge of Disaster.

Though the band is planning on taking the winter off from performing, its lead singer and co-founder Kate Hinote is planning a special Acoustic Showcase at the Rustbelt Market this February. 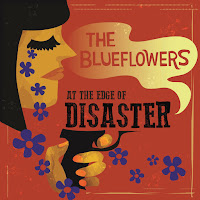 More about the Blueflowers, though; there’s a twinge of Western-twang in there, as we’d mentioned, but also some other piquant portions that invoke surf-rock (like something you’d hear on the Pulp Fictionsoundtrack), and a keen retcon of dream-pop (as if Mazzy Star’s eloquence was cannonballed into the glammed whimsy of The Sundays or Echo & The Bunnymen). But even then, it’s bit more eclectic than all that. You could call it “folk-noir” or “western-gothic.”

The band includes Hinote on lead vocals, her husband, Tony Hamera on electric guitar, Erica Stephens on bass, David Johnson on acoustic guitar, Jim Faulkner on drums and Erin Williams on organ and backing vocals. They morphed out of a previous project between married songwriting duo Hamera & Hinote (called Ether Aura). They put out their first album as The Blueflowers in 2009 and the current lineup solidified by the end of 2011.

Milo: Last year’s Edge of Disaster was one hell of an album. A full on production; cinematic-sounding, crisply rendered, evocatively spooky and swooning, altogether. Tell us more of the story behind the recording…
Hinote: I think we knew right away that (Edge) was going to be darker than previous albums, and that we wanted to press it to vinyl. (Hamera) and I were not even remotely prepared for parenthood and the insane sleep-debt and chaos that it would bring, nor for the emotional challenges and rewards that come along with it. We did, however, know we had more music to make and I had so many feelings right at the surface that I absolutely needed an outlet for at that time.


Milo: I was going to ask about that, about what it’s like to have a creative partnership with one’s husband, but I have to imagine new parenthood, by itself, would influence these songs creation…
Hinote: Anyone that knows me would say I can be intense, but being a Mom and being responsible for keeping another human, besides myself, alive, amplified that intensity by 100.  I ended up being drawn to older ideas that Tony had written that had a darker feel to them and I intentionally leaned towards gloomier themes and more dramatic vocal lines and delivery.  I remember vetoing ideas that I thought were “too pretty,” though some pretty things still made their way onto the album. We realized each song wound up with its own sort of character and that the delivery of the vocals was going to be a bigger part of the final production.
And, with (Hamera) and I, that songwriting relationship grows and changes over time. We wrote two albums together as Ether Aura, and now four as Blueflowers. As I gained more experience writing, he would challenge me more with the music demos he would give me and I think, ultimately, Disaster ended up being so intense for us because it really was the most collaborative that we’ve been writing an album. Being in the middle of a creative process like this, though, adds intensity to the day-to-day when you both feel passionately about the work and you’re going to wake up next to that person the next morning. I have never worked harder on anything in my life and Tony feels the same.

Milo: And then, talk about the chemistry between the band, as well as how (Ferndale’s) Tempermill studios is sort of your home recording base.
Hinote: (Hamera)’s been working out of Tempermill longer than I’ve known him, which is 19 years, and (Dave) Feeny has been a wonderful and generous resource to have on our side. [Feeny heads Gangplank Records]. And, there is definitely a family-like dynamic to our band. We have moments where things aren’t all puppies-&-rainbows, just like any family. I mean, you’ve got three women and three men and in that you have two married couples, so in that there are all kinds of chemistry and dynamics and hormones flying about our practice space. As far as song creation, (Hamera)’s the ringleader and he knows what he wants from everybody but each still contributes their own parts and helps shape the dynamics of each song. It has to be made with family. No room for egos in our process; and, we’re fortunate in that that’s not ever been a problem.

Milo: And so, tell us about your Acoustic Showcase!
Hinote: I wanted a showcase with friends at a venue where people could sit and listen and hear every note yet not have the pressure over worrying about drawing an audience, so that it could be a fun gig. The Rustbelt Market wound up being perfect for this. We’re planning half-hour sets from “The Half Bloofs” (Hinote, Williams and Johnson), Ryan Dillaha, Anthony Retka, Thirty Men (with Emily Rose), Escaping Pavement, Mike Galbraith and more. Meanwhile, the Bloofs will be coming back in April and we’re thinking about releasing a digital single. 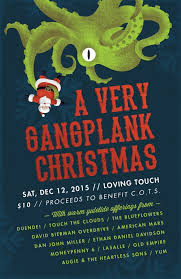