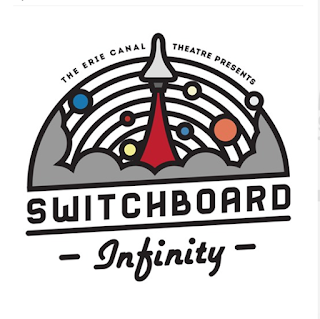 Calling out all the podcastic-ecstatics out there...

Whether you're a Radiolab-rat or a serial Serial listener, there's something new being produced right here in Detroit that I'm positively enchanted by...
The Switchboard Infinity

Gather the whimsy of B-movie 50's sci-fi adventures and pack in the off-kilter surrealism and intrigue of a David Lynch film and color it with neon in your mind to transfuse it into a cartoon-ish soap opera and you've got The Switchboard Infinity...

In the nostalgic yet no-less-thrilling vein of seminal old-timey radio theater, a cadre of creative writers, producers and actors known as the Erie Canal Theatre started "Switchboard Infinity" towards the end of last summer and have been regularly adding new episodes to their sci-fi radio serial.
The Switchboard Infinity is produced in Detroit, using a combination of theatrical improv and extensive sound-design. (So, Prairie Home Companion melded with Second City and a bit of Ben Burtt-ish inventiveness).

This Theatre "sends" each of their episodes down said Erie Canal toward WFMU in New Jersey, where DJ Stashu presents them on her radio show, "Dance With Me, Stanley."


Be ready for sporadic rug-out-from-under-you gear-changes typical to improv, along with the surrealist and high-strung hijinx of a Terry Gilliam-type that revels in mining the curious center of a dread/humor Venn Diagram. There is an Odyssey-esque narrative of space travel rife with vivid and strange characters, lifeforms and robots, tumbling you through several vessels, stadiums and alien plains. Both the sound design and the voice acting are first-rate, the former displaying a knack for imaginative noise that can evoke a range of settings and senses, from intricate locations' unique acoustics to believable robot-voices, while the latter is full bore into the theatrics, no matter how ridiculous they may be, the expressiveness has vigor and they sound simply immersed into their characters, however strange they may be...

Did I mention that they produce these shows from scratch...? Each week? Production days are at the end of each week and the ten members gather to go over the most recent episode and then begin brainstorming (guided by head writer & director Mike McGettigan) and developing scenes for the next episode. Technical director/sound-designer Clark Eagling, assistant director/sound-designer Jeff Jimison and executive producer Joseph Krause all have backgrounds in audio production. "We've all done recording, music or sound design in the past," said Krause, who has created several songs with Jimison for a band called Zelda and the Unibrows.

"I can get a bit giddy, in general, when thinking about all the sound 'recipes' for the various elements within the Switchboard universe," Jimison said. "The door sounds are a combination of an industrial line boring machine and a dog's squeaky toy. The Followbot is basically one part waving a propane torch around, one part me humming-and-whistling, and another part utilizing an oscillating desk fan, all run through a tremolo filter to give it that high-speed fan blade effect."

Jimison told us about the effects used for one character known as Brendy the Robot: "Her layers are particularly fun. I imagined her as a robot bartender and flight attendant. Naturally she has a beverage cart, which I picture as being sort of a permanent part of her body, so she's ALWAYS pushing the cart. Using her two large servo legs with suction cup feet. I accidentally pulled a couple tiles off of my basement floor with a (I should note: new, unused) plunger while capturing the sound of her suction cups. So Brendy's recipe has the plunger, plus she has a dash of Laser-Engraver-Table-Adjustment-Servo, a pinch of rattling glassware, and all manner of rapidly depressurizing beverage containers."

"Sparking electricity LOOKS incredible," Jimison acknowledged, "...but the recording of it just sounds like close-up celophane! So in these instances, we generally turn to mouth sounds..."

"The four of us came up with the concept and the story arc around the dining room table one night," Krause said.

The rest of the cast/crew include Nicole Pascaretta, Joel Gray, Nicholas Bitonti, Adrianne Johnston and Josh Campos. On show days, after McGettigan directs some brainstorming, Gray and Pascaretta take notes as everyone throws around some more ideas, leading to a bulleted outline of "beats" for the show, resembling, thus, the closest thing they have to a script.

"So our framework tries to hold it together but things still break away from it," said Krause. "We also keep a “show bible” so any scifi words that people make up are consistent in the universe. Sometimes misspoken lines become part of that. In episode six, (Jimison) says “architectural hub” when he means “agricultural hub”. So we’re running with that. We now have in our minds exactly what he meant by “architectural hub”, but it’s not clear that we’ll need to reveal that in the show. That’s part of the yes-and of improv. Mistakes aren’t really mistakes."


"(Switchboard Infinity) is about fun," said Krause. "But, then again, (after 7 episodes) the death toll in the show is really high. (Our) inspirations definitely overlap...lots of old radio drama, including Mercury Theater and The War of the Worlds, Gilliam, Firesign Theatre, Stan Freberg..."

The Erie Canal Theater is wrapping up its first season soon of Switchboard soon. They'll be taking a well-deserved break before coming back for season 2 (giving you ample time to catch up with each exciting 20-minute episode).

"Amazingly, this is all done for zero dollars, but it's still unsustainable," said Krause, who has a media degree from Wayne State and has been working on production (visual/audio) for more than 6 years. <
!>> "I'm still in a bit of disbelief that people are having so much fun making it; they all jumped at a chance for another season.
Here's the thing though.... The show could really use some more subscribers. Streaming on soundcloud is all well & good, but, assuming you've liked what you've heard so far...consider heading over to iTunes and assimilating...