Interview with Palm Tapes (with 'Cactus' by Best Exes)


Palm Tapes caught my eye last July when they released Watching Eye, an EP by Detroit's quirk-pop quartet Double Winter. I had been a fan of local specialty cassette releases from the likes of LifeLike for years, but happening upon Double Winter's recent release led me to go digging, to where I found seven more tapes already put out by this underground/indie label.


Detroiter Max Fabrick launched the Palm Tapes label back in October of 2015. The idea came to him in 2011 while he was living in Ann Arbor, (attending U-M), during a time when he was seeking a way to release his own experimental guitar compositions. What led him to his first eventual release was the realization that the label could be an opportunity to showcase a wider range of experimental works by dynamic artists disparate of any unifying genre.

"It's not genre-specific," Fabric said. "I focus on putting out music I think is good, and most often music by musicians that I know here in Detroit..."

You can attend Best Exes' upcoming show (Friday at the UFO Factory), and purchase a tape of their full-length Palm Tapes release. If you miss the show, you can always visit Palm Tapes' website to purchase a digital download version of a cassette.

Two other recent releases include a compilation of Canadian house music and electronic music, and a split-tape between singer/songwriters Stef Chura and Anna Burch.

"Cassettes seem to work on a practical and artistic level," Max said. That being said, he, just like every one of us, streams a lot of the music he listens to online. But with Palm Tapes, he's out to help artists forge a tangible artifact. "Bands can't sell Spotify streams at their merch tables. Vinyl is beautiful, but expensive to make, and, for whatever reason, CD's seem unaesthetic. So, cassettes are cheap and mortal, but believable as unique art objects. The visual design of every tape Palm does is carefully created!"

Max said he's pleased with the dubbing process he's developed for these cassettes. "Every machine brings out something a bit different in the EQ, and has different hiss and saturation," said Max. "Of course, some sound like muddy junk. Luckily, I found my ribbon-winner. I'm buying up used models on Ebay..." 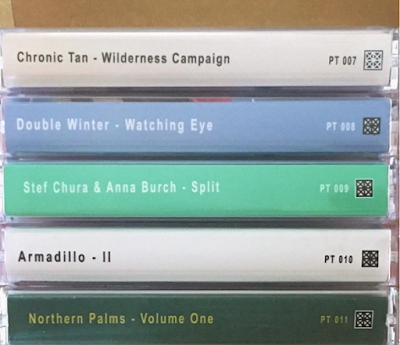 As planned releases come together, Max will typically ask the band to help create cover images for tapes, leading to his making a range of design layouts that the band then further reviews/edits.

"Every member (of Double Winter) has some visual art background, said Max, going back to the EP that served as my inroads into Palm Tapes. "So everything clicked easily, working with them on layouts. The cover image they found is a German shepherd overlooking a sleeping toddler, and their EP is called "Watching Eye," so I thought that worked!"

Max said that when he showed layouts to Clyde Moop for what would become the label's fourth release, the artist said, "Let's use them all!"  So, Max went with that!

With 12 tapes in just over a year, Max said he's motivated, to continue building a quality label for bands and listeners.

"It's like building an allegorical house; I want musicians to feel very comfortable inside it. It won't be the biggest house in the neighborhood, but perhaps, it can be among the most tasteful. Also, the front door is open, the jams are kicking inside and there is a keg in the back."