Dancing can exorcise demons. The thrum and swell of synthesizers and bass guitars can build into catharsis. Slickly synced-up live percussion with sequenced beats keeps the urgency levels intense, and vocals are pure, purging, fiery and forthright... Siamese hit their stride over the last year, culminating with the release of their debut self-titled EP.

Jo Champagne is on lead vocals, with Steve Thoel on guitar, Angie Kaiser on drums, and then newest member Eric Cojocari is on synths, (filling in the void left by former bassist Joe Sausser). I contributed a feature to Assemble Sound's blog, exploring the delicate-industrial, goth-glam, post-new-wave signatures of Siamese, here.

The quartet kicks off 2017 opening up for Queen Kwong at the Loving Touch.

I caught up with Champage to see how much the band's changed over the last four years, and where they're headed next.

Think of the band now....compared to when it first first...got started... How much has changed. How has it changed...
Jo Champagne:   This band has gone through a number of transitions. It originally formed as a project between Steve and I about four years ago. We would email each other song ideas, and then record our own parts over them. We had no idea the band would actually ever play live, and we have both been really happy with what has come of it. At the onset, we really had no specific plans or vision. We both like similar kinds of music, and we were just merging our styles and seeing what happened.


I haven't checked in with you since six months' prior, when the EP came out... What's new? Working on anything? Veering, or launching in to any new directions, style-wise?
Champagne:   Lately we have been working on writing for our full length album, which will be out in mid 2018. Our new material now seems to be a bit more electronic as well as more aggressive, which is super fun to perform. We have always had an angry and dancey vibe with our music. That is still prevalent with the new songs. Just..., maybe a little more angry. And a little more: screaming.


The song 'Bats with Baby Faces' is a favorite of mine. "Breaking down isn't as romantic as it sounds /  Where's the release?" Talk about how powerful that is, for the whole aesthetic of Siamese. I feel like that's quite an essential lyrical moment for the band's aesthetic of helping any listener find catharsis... And, with your also being a therapist, I wonder if that has also become a facet of music for you, helping people find healing...
Champagne:   The lyrics to Bats with Baby Faces, as with all of the lyrics on the EP, are very personal. The song is about breaking free of an abusive situation, and finding your voice. It's about finally saying what you wished you could have said before. It's about calling someone out, and no longer fearing the consequences.

...With being a therapist... I spend my days trying to help others get through emotionally difficult times or situations. It is extremely rewarding and I love it. It doesn't really bleed in to our songs, though. Music is where I become selfish. I use that as my own therapy. I would be so honored if listening to our music was cathartic for another person. Writing and performing it is incredible cathartic for me. When I get off the stage I am physically and emotionally exhausted. I think that is how it should be! 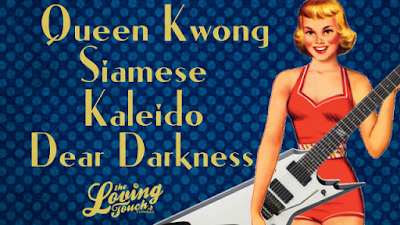 What are you excited for, heading in to this show at the LT, as well as heading in to the rest of 2017...
Champagne:   I am so excited to play with all of these bands. I wanted to make this a night of very strong and talented female musicians. I want to celebrate that, because there are far more men in the scene than women. I understand why that happens too... We often get treated quite differently, and it's super frustrating and intimidating. I am so happy that Dear Darkness, Kaleido and Queen Kwong will be playing with us. Its going to be such a fun night.
Posted by jeff milo at 4:00 AM