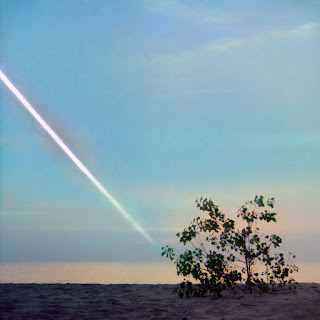 
Derek Stanton conceived the quip of professional musicians running out of options for monetary gain and thus having to, in desperation, "Turn To Crime..." Several years ago, Stanton moved back to his hometown of Detroit, after a long spell in New York, where he had a studio and fronted the now defunct psych-rock power trio Awesome Color.

With Turn To Crime, Stanton shifted from the swift fiery grit and feedback fury toward something more ominous and delicate, coiling into the eerier corners of new-wave and slinging glam-pop out into the darker milieus of the astral plains; this was more krautrock, or maybe a more neo-industrial-bubblegum-crooning, rather than psyche-rock.

Their latest album is out this week, with its lead single, "Chasing," streaming below. 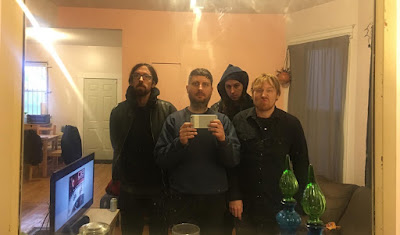 Stanton has been writing and recording the works of Turn To Crime from his Detroit based studio, Molten Sound, where he's also helped produce other regional artists' works, such as Kelly Jean Caldwell's Downriver. Most recently, Stanton's been working with Protomartyr, PRC, and Prude Boys! Lotta P-bands... Not only does the man have his own studio, but Turn To Crime also reaches its audiences from the humble HQ of their own DIY label, Mugg & Pop Records. Secondary is a digital download only, so stay tuned.

So, over the last four years, and across the three major recordings you've done with Turn To Crime, have you noticed any change, any shift in approach, or switch in preference?

Stanton: I'll be honest, even though this sounds boring: the creative process wasn't too different than Actions or Can't Love. I am still sitting down in the studio everyday, writing, experimenting with different instruments and different guitar tunings.... and using techniques like restriction, restraint, randomness and repetition. The 4 R's. I just made that up!

What sets Secondary apart from the last two...

Stanton: The vibe on this album is a little different. Sure it's art, it's important, and, for me, it was urgent, but it's also pretty fun, playful or satirical at times. It really covers a lot of ground. In a way I suppose it's hiding or veiling some serious shit I had going on in my life during the writing / recording process which I didn't want to expose or harp on (maybe it peaked through the veil a bit). I don't usually write about myself so much. This album does have an autobiographical song about my Grandmother's secret chocolate pie recipe.

What I like about songs like Get Your Pills From Tony, and Dead Man, and Secondary, is that it blends the playful and ominous; the melodies have a verve to them, and some of the synth hooks are quite poppy, the bass and those beats are almost danceable, but the lyrics have this dark sense of humor that makes sure the palette is never too bright and keeps things earnest… Or, that’s what I read in to it sometimes… Tell me about what you find most fulfilling about this project… I mean, when we go back to Awesome Color vs now, what is it exactly that you love most about working on songs like these, vs the songs you’d made in the past?

Stanton: The songs, the writing, the process, the band is just incredibly rewarding! It's like finding myself, finding what's unique about my approach to art and what's hidden inside. I dig deeper than previous efforts. I abandon any safe or easy methods. Any influences are completely subconscious. I want people to hear a Turn To Crime song and recognize it immediately as something unique unto itself, despite the natural penchant to compare.............On the other hand, with said pretensions, it's such a unique band that I have not been able to find our "niche" inside whatever kind of industry that may still exist.

I want to throw a question out to some other band members and get their take on how TTC compares to any of the other projects they've been in...

Joe St. Charles: I feel like that Filipino guy who's the singer for Journey now. I was a fan (of TTC) before I was a member so I'm really excited to be a part of it. But, now I feel weird about wearing my Turn to Crime T-shirt, like I'm wearing my own band t-shirt like Def Leppard would, or something. But Derek is the mastermind so I still feel more like a fan than a member. The band's been around for awhile but I'm the first live drummer, so shows are a bit different than they used to be.

What have you found most fulfilling about being in the band so far, Joe?
Joe St. Charles: The thing that sets Turn To Crime apart for me is how much I actually love the songs. Enough to commute from Chicago where I live to rehearse. I'd rather travel close to 5 hours to rehearse with Turn To Crime in Detroit than I would across town to play with a band that would be way more convenient, but way less fulfilling, and I've been in a few of those over the years.

So, tell us about the experience of playing live drums with TTC, and working on Secondary

Joe St. Charles: I'm not actually on any of the tracks on Secondary. It's all Derek.

Joe St. Charles: But Derek wants to change all that. In Turn To Crime's history of playing live, there has been an evolution from just Derek, to Derek and Ian, To Derek, Ian and an ever changing synth player, to now Derek Ian, Pete, and myself. It's like that Talking Heads concert movie. Derek can..., and, up to this point has, for the most part, played everything on the albums, but now that the band is fully formed, the next step is getting us on recordings which just started happening last year. I can tell you that Derek is kind of a perfectionist so I have to mentally and physically prepare myself to record a ton of takes. But it's a really good blend of perfectionism with positive encouragement which makes him such a good producer. He won't let you half ass it because he knows it can be better. He won't let you be lazy about it and that I like a lot. As far as learning the songs for this upcoming tour, most of them I already knew because Turn To Crime kind of constantly revolves at our house by both myself and my wife...

What's it like jumping in and integrating/interpreting those parts?
Joe St. Charles: It's really fun to decipher and reinterpret Derek's drumming. He has all these really orchestrated fills at very specific places that I always want to try and hit. But, I've been adding my own spin on things and a lot of the songs have more of a different kind of grit compared to the original recordings.

Favorite or weird memories, so far, from the tour you went on?

Joe St. Charles: I think we played in Buffalo and then went to some bar in the middle of nowhere for their karaoke night. It was both amazing and frightening at the same time. We aimlessly stumbled upon it after the gig. At the end of the night some giant skinhead dude sang that "Let The Bodies Hit The Floor" song from 2001 and we figured we'd call it a night on that note. I'm hoping to hit some more backwoods karaoke nights this tour.

Derek, what's next? What are you looking forward to?

Stanton: I'm looking forward to playing more shows with the band. Would be sweet to hit the west coast. Might be time to do an album with the whole band, perhaps in another studio, or probably mine. I got my fingers crossed xx some opportunities come our way. I have another TTC record called "Down in the Basement" that's mixed, mastered and waiting for the right time to come out. It's an album I did with my buddy Greg Ahee on keyboard & guitar. It was also mixed by Jonathan Schenke (like Secondary). It's a freakin amazing record! Somehow super weirdo synth pop vibes. Excited to drop that one!