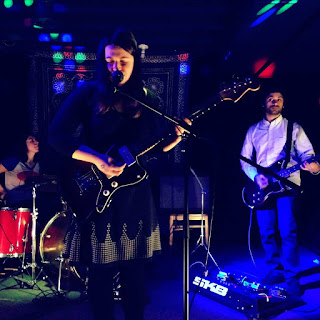 Kick off your weekend with a brand new single from Ypsi-based reverb-revelers Tanager. 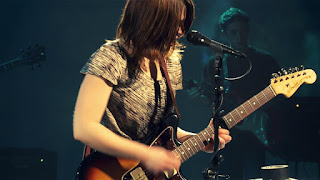 Led by singer/songwriter & badass-guitarist Eleanor Daftuar (pictured), the new song is a dizzy dazzler of distortion waves and billowing low-end riffs, punched along by a perfect slowed-headbanger of a beat.

The last we heard from Tanager was a live in-studio performance for WCBN. Since then, Daftuar has been contributing terrific fretwork on lead guitar for another Ypsi band, Child Sleep, which, correspondingly, is fronted by the drummer of Tananger (Mary Fraser). Rishi Daftuar completes the trio on 2nd guitar, with some nuanced twangs and rhythmic chording under Eleanor's more psychedelic swirls.

I love how that caustic yet sweet guitar shears its way in to those first three seconds before, sorta MBV-ish, the feedback crashes over your ears like a brilliant/brisk wave to carry you off into realms of almost-dangerous-yet-mostly-delightful dream-pop detachments. Eleanor's vocals, backed up by Mary, create this beguiling counterbalance of a soft, soaring, gossamer thing curtained upon the cosmic-gravel spill of those ultraviolet guitar currents.

So, take a listen... Hopefully drop a buck in and download it... It's the first taste of Tanager's new full-length album (their first in in about 5 years...), which should be out in late summer, or early autumn.
Posted by jeff milo at 8:42 AM