A Dialogue With Music

Ten years ago I wrote the cover story, along with three other interviews, for a fleeting issue of the now bygone Real Detroit Weekly. While I didn't select the final headlines, they were under a bold banner provoking the question of "What Happened?...to Detroit Rock 'n' Roll?"

My angle was, more so with an olive branch, begin lurching the spotlight away from its fixed point of shining on the "garage" sound and widening it to include a fuller survey of what I surmised to be a next wave, or next generation, of bands starting to combine more synthesizers with their rock, or drum machines, or traditional jazz instrumentation.

But it's interesting to look back and see how simultaneously naive and progressive my outlook was way back then...., albeit mostly naive. But I just wanted to expand the conversation. I encountered a rock club scene of 2003 and 2004, having just missed the more dynamic eruptions of the White Stripes-centric garage explosion. The bands I latched onto were similarly working to change the conversation, per se, with more adventurous arrangements, risky time signatures, quirky noise experimentation, fusing lots of genres and really being fearless to, cheesy as it sounds, follow their heart, when it came to making sounds on a stage....

And once I started encountering deviations from the raw, riffy rock trends, my gaze widened even further..., towards artists that had their core sound springing from the realms of pure techno, hip-hop, folk & Americana...., even metal, post-grunge, or all-out power pop.

So this morning, I'm having a very  "if I only knew then what I know now..."  kind of reflection. I had no idea, then, that this odyssey of meeting, interviewing, and documenting a new Detroit or Michigan area band would proceed without a break for the subsequent 10 years. It's been very emotional, but mostly in the best ways.... Because this blog was always subtitled: a dialogue with music.... That meant immersion. I was living inside of the music, inhabiting it and studying it, noting its characteristics, following its melodies, scrutinizing its signatures. Then I'd let it all wash across the intangible cognizance of my past and my present and explore the feelings it arose in me, the visions it gave me, the overall affect on my heart or soul or just the tapping of my foot.

And so many of those bands have no broken up. Lots of those albums are somewhat forgotten. But for that moment, if just for four hours, it was the world to me.

And I just keep finding new worlds. It's intense, in a way. At least I make it intense. That's my preference.

So, looking back on 10+ years, I"ll be reading another essay that covers some of this ground and gets very reflective and philosophic about my experiences in the Detroit & Michigan music scene. That goes down FRIDAY NIGHT at 8PM at the FERNDALE AREA DISTRICT LIBRARY.
More info 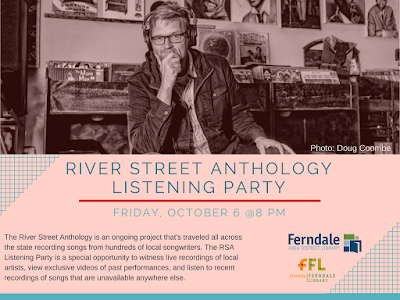