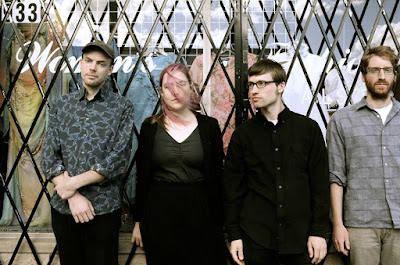 Immersive. The sensation that you're either slowly starting to levitate or submerge, the sustained vibratto pulsation of rock instruments like guitars and whirring cymbals, the swooning crest of psychedelic-operatics, the fusing of electric bass to acoustic upright, and the astral-plane ambiance of assorted synths.

Let's listen to a nine-minute song by saajtack, while you read the rest, below...


saajtak are a Detroit-based quartet whose trajectory includes the outer realms of jazz, rock, and electronica, excavating a captivating cache of sounds, noises and intonations in each of their nebulous symphonies. The rhythms keep a natural order, while the guitar, synth, and especially the vocals, defy the command of formal arrangements and seem to wonder with an uncanny purposefulness, freed from refrains or hooks and pulling you in, instead, with the entrancing whim of these purely original expressions. There are, however, still audible charms of the musical DNA from jazz standards, post-rock riffs, trip-hop's nocturnal traipse and electronica's pensive cascade.

But then, individual elements break free. The vocals attain escape velocities that pull you past the song's established stratospheres and you attain a mesmeric drift...The drums and bass thrumming below sustain a sense of orientation as the guitar and synth fill the periphery with atmosphere.

It's still too venturous for traditional rock radio, but "Underscore [_]" is a solid single!


It's concise, yes, but it also finds the band not only performing with the most urgency, but also demonstrating their knack for gracefully going form divergent individual phrasings into sudden interwoven threads of harmony. They call pop music escapist sometimes... But this is a whole other kind of escape... From whatever you need sanctuary from, be it "the norm," or status quo structures, or just unfocused thinking... saajtak shakes you up.

They released their latest album, Spokes, a couple months ago. This Friday, in Ann Arbor, they're performing at Encore Records. This is an hour-long set that starts at 8pmMore info