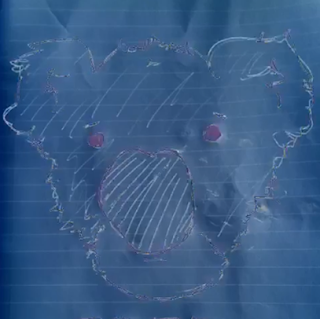 You never can tell what a Koala is thinking when you stare into one's eyes. That creature's facial features make for a great mask, utilized fully by obfuscated rap entity FRED. I wish I could tell you more about FRED. I'm going to try to, because I was able to ask some of its members about the new EP. Curiously,

I have my own conjectures as to who could be behind FRED..., likely a few suspects out of the Assemble Sound collective. But nothing confirmed.

I would say that the idea is to subvert the schema where rapper as messenger or preacher gets muddled and confused into the cult of personality... When all we have are the void-like beady eyes of a Koala staring out at us from the album cover, no face, no name, no backstory, then the focus trains entirely on the lyrics.

"Are we certain what we see?" "Is trying even living?" "I'd ask my former self if he could tell if this is questionable..." Here's the EP...

But you can follow FRED on Twitter if you'd like to try to suss out a bit more elucidation... What's most stirring about the listening experience of the FRED EP is that it does become voyeuristic in a way, even though you have no face or personality to attach to it as you go in... You become a fly on a wall of a bit of a haunted house-like realm where FRED is pacing, pensive, contemplating, plotting, analyzing, resolving....becoming sharper, becoming more resolute, clearing his head, absolving his soul. And you have no idea who it is....

How much can you tell us about FRED?
FRED: Not much: Koala-esque.
Is Fred someone singularly, or does it become a band-name with you as collaborator?
Yes, and yes. FRED is both singular and universal.

Can you comment on the culture of hip-hop, how "the moniker," or the emcee, involves such an emphasis on personality, on self-expression, on making your notoriety as a lyricist intertwined with one's name, one's self...and how this subverts that?
FRED: If it doesn't feel traditional, why treat it or release it that way? Would a FRED by any name sound as sweet? Probably. Even when you attempt to disconnect from a specific "moniker" another one will always form. The personality of FRED stays fairly direct in the music but otherwise very open to interpretation.

So....what else set this project apart, in terms of how you approached it?
FRED: This project wasn't really approached, it just happened. A beat was made, raps followed and then three more until FRED had four songs. Concepts and relevance were never really discussed.

I always enjoy that you have your ear to the ground in the indie/electro & kinda geeky art-pop realms... Case in point: Architecture in Helsiniki in a rap song? I love it! That trend continues, but what are some other sublter nuances that you've been picking up along the way as a producer? Or what changes the way you work on an album like this, vs something from 2012?
FRED: It's less about rules and more about feeling. Closer detail to layers and tones but still making plenty of room for the words to tell their side of the story. I guess that Architecture in Helsinki sample just felt like a great chorus for a rap song at the time.

How do you think FRED will fit in (or not,) with the greater Detroit music scene/rap scene?
FRED: Ain't up to me. That's on FRED. It'd be cool to see some FRED shows because there's a lot of feeling in those tracks that would be great if seen spilling into a crowd.
Posted by jeff milo at 5:27 AM