Halloween is, and always will be, special to me, for a number of reasons. I love the electricity in the air on a cold autumn night. I love the spark of good-natured mischief with costumed kids taking over the streets. I love the thrill and schlocky elegance of scary movies. I love dressing up and becoming someone or something-else.

Most of all, Halloween is a time when I came into my own. And many thanks, for that, go to Brian Rozman. Rozman's a local photographer now, with five years under his belt as a consummate craftsman of captured images. He's also been a key component in the Detroit music scene for more than 13 years now...under the moniker of Carjack. That started out as a solo band, but has since become a trio...a trio you likely saw at Theatre Bizarre last weekend. 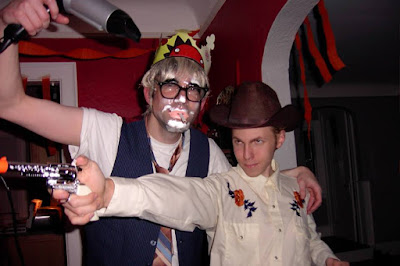 Halloween 2005
There was no Crofoot. No Creepy Cheapy. No Loving Touch Blitz. No Lager House Cover Shows. There was really just a sweet little twist-n-shout masquerade called The Zombie Dance Party. But Halloween around here wasn't as manic as it is these days... So here we were, Brian and I, just hanging out at his house on a quiet Halloween night, listening to The Cramps and The Mummies and the B-52's... Turns out he's got all this random paraphanalia in a closet upstairs. I'll assure you that we weren't drunk, or high, or anything... We just kinda started losing ourselves with ghoulish glee. I think we threw together about 4 different costume combinations and started choreographing weird movements and fake fight scenes, be it cowboys, samurai, aliens, or whatever... It was freeing and utterly geeky.

Cut to a week later... And Brian's about to play his first show ever as Carjack. It was more straightforward electro-punk back in those days, one man with distortion-heavy riffs singing about breakbeats, stereos and Flying Pizza. And I came up for the last song, danced my ass off like no one was watching, and played a slide-flute. If you know anything, you know that slide-flute might be the most embarrasing instrument on the planet--yet we reconfigured its charms into the aesthetic of a punk song, so, well, we just didn't care. Carjack/Brian/Halloween - all three of them, as a band, a person, and a holiday, inspired me to gracefully not-give-a-shit and Just. Go. Weird. 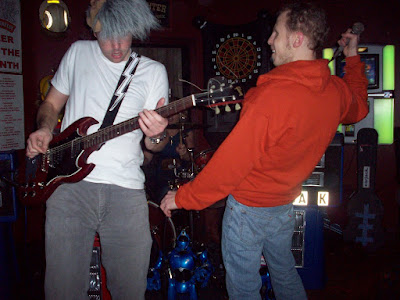 Over the course of the next year, I would make cameos at every Carjack show. Always the 2nd-to-last song. Always including costumes, masks, sunglasses, robots, cinematic music, bait-and-switch stage choreography, fake fight scenes and syncronized dancing. I was, as the DEVO song goes, "through being cool..." and embracing an inner mongloid. But, really, I was just following Brian's lead.

There was precedence for this kind of outrageousness and theatricality. Doll Rods. Wolfman Band. Even back to The Mummies. But wow... what a wave that followed throughout those next years of 2006-2009.... Johnny Headband. Charlie Slick. Marco Polio & The New Vaccines, Champions of Breakfast, The return of Satori Circus. Weird and wild and unpredictable....the outsiders were IN. And I felt so much joy and a sense of identity to be lost up in their stormy dances.