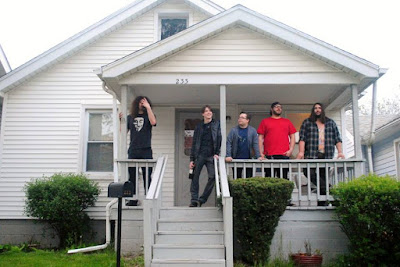 The musicians  making up The Lagerheads, a band that would eventually debut on this scene in early 2016, actually spent the entierity of 2015 just working out their first batch of songs together. They proceeded to spend those first few shows experimenting with how they wanted to perform these arrangements of high-energy rock, a blend of grungey emotion, garage rock explosiveness, raucous metal tempos, and a bit of an indie/post-punk sleekness. Each player brought their individual sensibilities for creatively tilting the structural frames of rock music while still capturing its characteristically graceful intensities....

Next weekend, they're releasing their first EP, and you can stream their first single, "Like It Or Not," below.

"Like It Or Not's" has hooks that crash like a cascade of mini crescendos; the kinda song you'd throw your whole body into if you heard it live... Headbanging would almost be too passive a response for a tune this urgent. The drums and bass set off like bullet train that picks you up...wait, engulfs you..., from the station, and from there the guitars speed you forward with this tight, yet tremulous interplay that almost wobbles things off the rails. The vocals are full, mid-low range melodic growls that can appropriately arc up for some emotive howls to harmonize with the forcefulness of this song.

Benjamin Kay is one of the guitarists, along with Michael Biondo. I chatted with Kay about the band's first two years together. Bassist Jamie Mosshart and Phil Giannotta on drums joined early, but later, Rob Zinck came in to add vocals to a batch of songs that had been worked out as instrumentals for that first year. 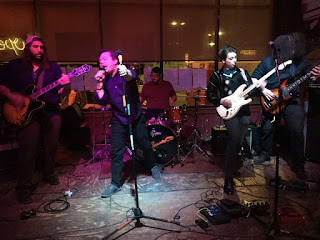 Their EP release is December 15th, with a show at PJ's Lager House. Opening up will be Five Pound Snap and George Morris & The Gypsy Chorus.
INFO

Tell me how this band came together?
Benjamin Kay: All of us had been playing shows together in different respective bands for awhile, so it was really more the local community that brought us together than a particular sound. I remember thinking about stealing Jamison away from The Erers after seeing them way back in 2013. Mike and Jamison are such fantastic players that my only real goal was to get them in a room together and see what would happen. Phil was a natural fit, and I knew he was available, since we'd both just left Awesome Jarvis and the Whales together. Rob was the late add after months of writing instrumental music, so he had the daunting task of figuring out how to sing over these songs that had already been arranged.


Are there common influences you each share? Or what's that chemistry like? And how did it inform the five songs on the EP?
Kay: Everyone's musical background is all over the map, so it's sort of a surprise that the sound on this EP is as focused as it is. Mike writes these really pretty Americana-rock melodies and really belongs somewhere in the late 1960s. I've always known Rob to write these socially and politically charged punk songs. Phil has a great ear for pop hooks and arrangement. Identifying influences is tough because each of the five of us would probably give you a complete different list.

So..., "rock n roll" can be utilized for certain vibes. It can be fun and summery and road-trippy... It can be fast and heavy and metal-ish. It can be bluesy. It can be poppy. You guys are giving your intonations a lot of grit, the vocals are impassionated and addressing substantive issues with gruffness, and the drums can pummel... Also, the guitars are super intricate. Talk about what YOU guys want to do with rock, or just how you generally approach the writing of a song?
The song writing is very collaborative, but it usually starts with a sketch one of us had. There are five sets of DNA in every song, but at the same time there's some distinction between songs that came out of Jamie's head versus one of Mike's. I think the end result is so riffy because that's the closest thing there is to a middle ground between our different backgrounds. We all want to say our piece over the course of a song, so you end up with a lot going on in almost every passage. The goal usually is to try and take the fun parts of progressive rock and package it into a neat, three minute garage rock shell.


Could you talk a bit about this single, "Like It Or Not," and about the recording of the EP overall?
Like It or Not actually predates some of the band members. It was the first thing we'd ever jammed on. After two years of opening with it, it's still probably our favorite song to warm up with. Nothing wakes a room up like a two minute barn-burner. The rest of the songs came pretty quickly after that. I think we had written everything on this EP by Spring 2016. The recording sessions were very laid back, but very focused. We'd been rehearsing the songs for quite awhile before day one in the studio, but still managed to learn a lot about them during the sessions. A shout-out to Jimmy Dixon at Homestead Studios, when we have everything ready for #2, we'll definitely be headed back there.

What is your take on the Detroit music scene? And does it, at all, play an influential role in your music?
It's a terrific place to call home. It's more influential for some of us than others; Jamison and I cut our teeth on Detroit garage, while Rob is from Alaska and played in death metal bands.


Plans in 2018?
Gig on A Five Piece Problem until the city is sick of the songs. Then, get ready for the next recording!