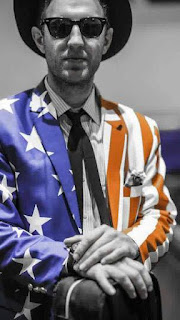 with:
RemnoseJoe Jaber and The Last DivideGreg Blucher and his band (Greg Blucher Music)
The Red Rocks (reunion)


Zander Michigan's been on a journey of discovery these last four years. He's been discovering what folk music means in this modern, mobile, music-streaming era. As his voice and style have taken shape, it's evident he's finding out what folk means to him; what it mean to an audience...


This journey has taken him from a debut of strumy, Dyaln-esque raspy folk, to an indie-pop informed kind of Americana-rock. And now we have something that can blend both of those, while especially threading a batch of his most indelible melodies and catchy choruses. With Kitchen Sink # 1, it's evident that he's tapped into how important a heartfelt earnestness can be in affecting that musical experience, that relatable "folk" experience.

There's a new kind of warmth to the instrumentation and vocals on these four new Zander songs, as well as a soothing cadence to the arrangements. It's upbeat vibe may be indicative of a lyricist tapping back in to the things that matter most, the things we may too often let slip through our considerations in the midst of a digital life blurred by cascading social media updates. Worn down and disenchanted with the drone of white noise on the Internet, Zander took himself off line for a few months to do a bit of soulful regrouping. Tellingly, this new EP kicks off with "Born Again," a jaunty, almost levitating song that taps into gospel and folk, with a piano led rhythm and clap-along percussion. It's something to sway to; swoon to, even... To reach that kind of rejuvenation is something we'd all hoped for, this past year. Zander puts it to music.

But I wanted to stream "Feel Like Home" for a few reasons, chief among them: I think it's the catchiest melody he's ever penned. It's a waltzy little ballad about someone taking more chances after falling in love, and feeling all the more assured by it. It's about a tension-relesae, a minor but blissful kind of realization of the self. It  is, again, the kind of sentiments we all have been yearning for a bit more often than usual, this past year.

What these four folk songs mean to me is a reminder to practice not only a lightness of mind and soul, but a call to sustain your resolve, or even just a belief in yourself.

You can download this EP via iTunes, Bandcamp and SoundCloud

A portion of ticket sales benefits Bark Nation, with the nonprofit's efforts shelter intervention and enrichment initiatives for area dogs, with team members tabling at the LT to provide education about their mission.