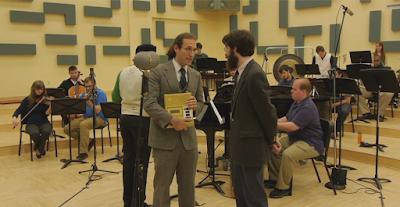 It's not every week that I get to write about a band that none of my regular readers have ever seen, and share some songs where they're performing with a WSU Orchestra and vintage cassette players in a live Skype session beamed directly to the Netherlands.... In fact, I've never gotten to write about that...

And I only say you haven't seen this band, Zelda and The Unibrows, because it has always been designed to be a recording project. It is rare, if ever, that they perform "live" in the traditional sense, as it would otherwise be with most bands I've covered.

Detroit-based audio wizards & song creators Joseph Krause and Paul Szewczyk started this band when they were teenagers in the 1990's. As it's evolved, it's stylistic shape has become amorphous, free of any tether to a specific genre, mood, or theme. The four songs on the EP that they released last week span a wide gamut of aesthetics and emotion: austere, absurd, sublime, surreal, jangly, orchestral... 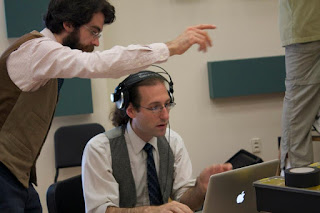 The EP's title, Museum TV Station, gets its name from a project that Netherlands-based artist Lado Darakhvelidze coordinated several yeasr ago, where he was inviting various musical groups from around the world to perform live over Skype, and then have those songs shared with a new and unique audience hosted inside galleries throughout Europe.

The track streaming above was recorded in 2012, and features a regular Zelda-collaborator, Jeff Jimison. After Zelda's initial collaborations for Museum TV Station, Krause put the word out during an Open Mic at Thistle Coffee that he was eager to invite someone else into the Zelda fold for their next MTS round, and Indervir Singh, who was, at that time, just graduating from the WSU music program, said he considered this collaboration with Zelda to be a exciting opportunity for a conducting/arranging exercise for a small symphony of mostly students and volunteer players.


Orchestral Skypecast - "Pluffart" and "Recordare" from Zelda and the Unibrows on Vimeo.

"I Like Food" is a jaunty march coiled with surfy Morricone-esque guitars; a bit like a Frank Zappa Saturday Morning Cartoon commercial. "Blissful Cessation" has a swaying groove to it, easily the catchiest tune of the four, what with those hand-claps and that violin sweetening the jangly guitar and vocals.

"Pluffart" blossoms open like a sleepy, stretching cloud; the instruments kinda bustle together in a disjointed harmony, with xylophones, pianos and strings leading the way, until a declarative clarinet blurts cheerily over the top. Krause and Jimison give a theatrical reading to a strange bit of dialogue that Krause found on a random cassette he bought from a thrift store several years ago. And then there's "Recordare," Szewczyk's poignant requiem-mass-inspired composition, with an impressive arrangement by Singh. The EP's final song is, as Krause said, "...perhaps the  most serious that a band called 'Zelda and The Unibrows' has ever sounded..."