Listening Back on 20 Years of Detroit Music: Part 4 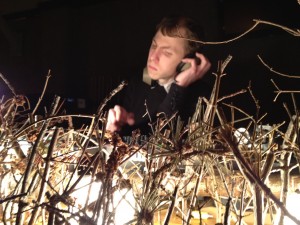 I started writing about local music around 2004. And it did feel like a big deal when I marked a 10 year anniversary. But I'll tell you... I've never felt busier than during these last four years. Sure, just like any institution, a new wave of younger participants tides its way down the halls of the music scene, and they're full of energy and ambition and eagerness to take on tours to Chicago and New York, and likely are comparatively freer than the older guard from 2004, now, who have each gone on to other things, or perhaps started families...

STILL, so many of the musicians who first scorched the sonic epiphanies I felt at my first show years ago are still at it, in other bands now, collaborating with other musicians, trying new sounds and styles. Bands like The Hentchmen will never die. Zach Shipps and Chris Koltay are still behind the boards. Beloved underground bands like Thoughts of Ionesco or Bear Vs Shark can always get back together for an inspiring stint. And other longtime garage rock music mavens have moved on to other ways of energizing the music community. Also, there are musicians who I came up with, my contemporaries, age-wise, that I've enjoyed witnessing (or listening to) their creative evolution, as they've moved from one project to another.

These four blog posts have been heavily nostalgic, and they've found me reverting to my mindset in 2004, when I would look up to garage rock musicians as the seniors to my freshman. I have evolved from that thinking, by now. There aren't, or there shouldn't be, any levels of seniority. We're all in this mix together, we're all spurred by the same strain of a passionate love for music; it gets expressed in myriad and unique ways, but there's always that same something that few of us can ever quite capture in words, that something that keeps us, as the Flint Eastwood song goes, "in love with the feeling..."

AND, I've evolved way past being just an indie-rock kid, fresh out of college. Hip-hop, neo-soul, techno, dub, house, blues, country, Americana, noise-experimentaiton, chamber-pop, psychedelia, ambient electronica, new-wave revival, gypsy-folk, jazz, pop............ I am immersed in all of it, each week, each month, each year...., all of it created HERE! All of these emotions that I've felt from this music were triggered by the arrangements, the vocal and instrumental performances, and the productions of local artists and engineers, both live and on records.

I have never been, nor did I ever purport to attempt, to be a "music critic" when it came to my detailed written encounters with Detroit bands. I was inspired, enough, just to be able to be in a position to tell stories. My interviews with these bands, and there have been hundreds, are an evident form of telling a story. But when I sit down and listen to the songs, when I write about the music and what it sounds like..., I'm also telling an extended part of the story in that aspect. It's always just been about creating a dialogue through music; a way of telling the story of Detroit's musical artists, year to year... And I could go on... And I will go on...

So what I have for you here is music created mostly between 2014--2017, with a few older examples. But lots of newer groups that I've been digging during these past four busy years... AND, as I always say, these playful playlists were reliant upon what was available on Spotify. But I did get a lot of favorites, nonetheless.