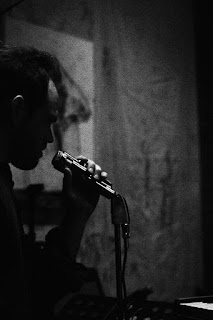 The ever-contemplative Sean Lynch was once known round these parts as the voice and guitar-wizard behind 800Beloved. While that textured and sonically lush shoegaze/dream-pop project wound down in 2016 (after 10 years of life), the studio-maven and audio-experimenter would switch musical gears to another side of the spectrum when he essentially became the host of a austere graft of political/social commentary known as Lyle Lynch. Lyle was a fiercely, even darkly, satirical reaction against a rising tide of hateful energies that crested you-know-who into the White House.

At first a fractured reflection of a severely troubling regression/devolution of civility, coherency, equality, an affront to the progress made in areas of science, a debilitating speedbump to any hope of progress going forward for civil rights, education, the economy...we could go on..., Lyle Lynch became, on a four-song EP, a sort of crusading folk-singer of sorts, but not at all in the Dylan/Baez/Seeger schema of style or presentation....

....it was post-apocalyptic-Americana, an essential following-through-to-what-could-be-inevitable-conclusions or culminations; a poetic and musical depiction of what might be, if the ship isn't steered away from its current course.

...and it weighed heavily on Lynch, not just emotionally but psychologically. Music writer Jerilyn Jordan documented the necessary death of the Lyle character in the Metro Times two months ago. Thusly, I'd like to shift the focus of this interview with Lynch toward the veritable reemergence of No Body. No Body was another creative entity of Lynch formed a bit before the completion of 800Beloved's third & final album. The Uncanny Valley came out a few years ago, a darkly vibrant composite of organic and synthetic elements, interchanging potentially more palletable 4-minute electronica-pop arrangements with more atmospheric, eerier and textural compositions that could take experimental drones and post-industrial chills and weave them into something with such presence, as though even a digitized sound could attain a lifelike intake and exhaling of oxygen.

But back to Lyle Lynch, for just one second...
"What ultimately motivated me to turn outward (with Lyle Lynch) came from, and God bless Nina Simone for saying this, that it is, and I'm paraphrasing, an artist's duty to reflect the times, their own times, particularly. When I heard that, I thought: I personally don't feel authentic or right talking about some dark love affair (in a song's lyrics) or the angles of my personal loves (in a song) at this moment. It's not about being relevant, it's about...compassion, maybe? It's not like I was trying to be some guerilla revolutionary. But someone who records a couple tracks in their basement can maybe reach 30 people? Maybe those 30 people know 90 people? And those 90 people can know a couple thousand... That's just from one lonely kid in a basement with a four-track. I've been that lonely kid before. But I'd never felt the nudge, until then, just like a lot of these young kids are feeling right now." 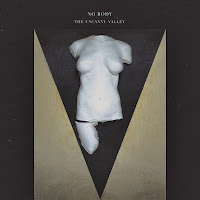 Lately, I'm personally growing more and more beyond trying to situate a piece of music or art in a genre, or tie it to being part of a continuation of a paste decade's movement. No Body is curtained by a vaporous distortion but pulses with a persistent beat, while guitars snake minimalist melodies like lilting thoughts through a lightly-tremored brain that, with each drone, loop, or delay, is steadily settling into a meditative state. The "uncanny valley," to me, when I hear this album, is the manifestation of an idea of a place, or even a mindset, something to seek. And this music sounds as though it is ever-seeking.


"No Body is strange in that it's kind of archaic equipment with new equipment," said Lynch. "Anti-laptop type o' shit. It's very modular, very in moment. I'm building the sound in the moment and having to worry about the responsibility of singing the songs in the right time; there's really no prerecorded material with it. I get to play in a different way when I'm able to change filters while singing; it just feels different, I don't know how else to explain it."


No Body has only performed live three times since 2012
Coming up: April 14th at Russel Industrial Center with Krillin, minihorse, and Exposure Therapy (7pm)  MORE INFO 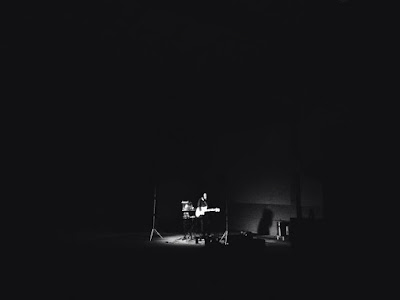 "There are a lot of elements that I'm involving, live, that are now completely random and beyond my control, which is really fun for me. When you involve too many machines, it's possible to have too much control. I don't even wanna have 60% of control; that's no fun."

Throwing oneself into an expanse like this, adrift in possibility and creative chaos, is one thing. Then there's the concept suggested by the name, No Body. Lynch has often, it seems, obfuscated his identity, if not downplayed his personality, with previous projects. 800Beloved was all about the aural experience, Lyle Lynch was about making a statement, (to be reductive), and No Body seems to be similarly diverging away from the cult of celebrity that can sometimes come along with one's desire to be "an artist."

"I love the idea of the context that there was this sort of strange character (with No Body), delivering virtually identity-less music; some of it masculine, some of it feminine, some androgynous, or at least I hope it feels that way. For me, I've always gotten my thrills in the studio, when those rare moments come that you're able to get the sort of chills to run down your back from a sound that comes to you or words, or whatever it is...."

"I know that's not an original impulse or thought, but I think most people, if they could dissect it, that's really the narcotic that's keeping them in the game (of music) and especially for a person in their late 30's, like me, where most of my friends' music (projects) have died off or they're not producing albums every two years, anymore. Don't get me wrong, I wish, sometimes, that Uncanny Valley could pop up on a list somewhere and rise out of its strange obscurity. I do think I'm the most proud of that record, as a record, from start to finish, because to me, it doesn't feel like me, all the time, which is the nicest thing."

Lynch isn't subtle when I ask about No Body potentially being a form of ego-killing or ego-reduction.

"To be honest, I think if you ask most people, they'd think I have a huge fucking ego! But if you can sidestep that word, ego, it's not about that, it's that, as most people who are nearest and dearest to me can tell you, I just don't know how to live without focusing on things..."

...Lynch may not pop up on the pages of this blog, or in the local zines, or be gabbed about after shows at various venues, of course because he's comparatively more M.I.A. than most local musicians. But all this while, he's in his home studio over near Milford; purple curtains drawn, headphones on, trading out instruments, trying out pedals, creating drum parts, tweaking, experimenting, reconfiguring, remixing....

"I'll hyper-focus; sometimes I don't know how to turn the brain off. And sometimes my energy strays to different directions so that sometimes it creates a recoiled negative effect where I can come off as abrasive or it might seem ego-driven. But it's more that I'm just fucking totally hyperaware of myself. People talk about being self-aware, I just don't know how to shut that off."

...and No Body becomes an exploration into his own mind, in this regard...

"I'm truly interested in all these innerworkings in people--and especially in myself. I want to know how to get a character like Lyle again. I don't want to get that specific character, but something just as interesting can manifest. What combination of ticks do I have to go through to find another character like that? So, I just think that life's more interesting that way. Not to treat yourself as this one-sided ego-driven character, but maybe to develop alter-egos. It's safer to challenge things through (alter-egos)."