What follows is the first of three consecutive posts about an event hosted this Friday evening at MOCAD.

"Piscean Dreams: An Evening of Inward Swimming" brings together three especially distinctive artists that utilize music as an element, arranging sounds more so like alchemists, and activating the potential of an otherwise perfunctory event--such as a concert--into something that exceeds any possible expectation you may have held. It's vitalizing for me to get to write about vnesswolfchild, Matthew Daher,and the Imaginotron, because while I spend much of my year writing about music that is comparably more "conventional," it dawns on me, listening to all three of them at once, that the majority of songwriters tend to regard music as a vessel of inquiry, something to work out frustrations over tough questions that don't have answers yet...

But these three artists come in to my ears sounding as though they've each caught a different, further-off orbit of ideation, spinning around the musical cosmos on a comparably more obtuse track, and coming back to Earth enlightened. Maybe music isn't for posting questions. Music is for accessing answers. Or that there are answers within the amorphous essence of music. But then they get me to expand my gaze and it dawns on me that the exchange, the listener, the participant, the audience, and the artist, their sounds, their works, the exchange is about so much more than music, music, and what it sounds like... 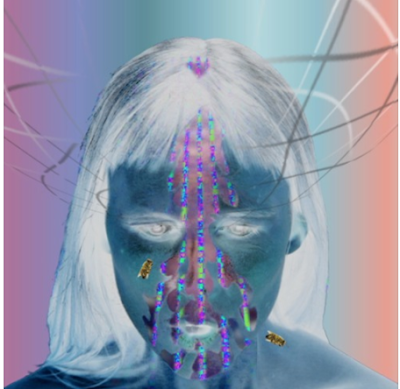 Anyway, I knew I was going to wind up going deep with this, and I couldn't just snip the thoughts shared by each of the three individual artists and thread them together in a cohesive narrative. Their philosophies may align at MOCAD this Friday, but their music is too unique, not just in style, texture and atmosphere, but it's unique to each of the three artists' personalities and experiences.

The MOCAD event is a pre-party for the vernal equinox...a spiritual thawing, if you will, where we can melt and meld. Each performer will incorporate new explorations in sound, light, costume, installation and audience participation. Local astrologer Alexander Weyer will also be there providing prose, stories and insight into the planetary energies of the night...

"Piscean Dreams is going to be a very special show,"performance artist Vanessa Cronan (aka vnesswolfchild). "It's a continuous two-hour interactive immersive performance that takes the participants through a musical clearing, healing movement, gratitude reflection, and ecstatic chaotic absurdity...Themes we will be working with throughout the night are the healing power of water, gratitude, grief, completion, and putting things to rest."

vnesswolfchild creates the kind of music that causes me to hesitate before describing it in haste. In fact it causes me to question even attempting to do so. Drum machines, sequencers, loop-pedals, mesmerizing vocaliations; mid to slow tempos give every instrumental element room to breathe and enough scope for each percussive arrangement to effectively entrance. Bass, beats, and te human voice..., synthetic and organic, cosmic and primal..., a singular sonic path towards a new kind of reverie...

But more accurately, vnesswoflchild is, yes, a musician, but also an interactive ritual healing performance artist. As a healing movement facilitator, she uses sound, sculpture, installation, video, and movement, to create performances that encourage an audience to uncover, to understand, and to further integrate the more subtle aspects of existence.

She said that her most recent works are exploring "...inner strength through a practice of moving contemplation on hero and goddess archetypes..." as a means "...to learn how to more deeply hear, commune with, and protect Mother Earth. Each work is an act of reverence for the divine feminine."


I asked her naive questions, sort of taking on a Devil's advocate role of being tied-down by my preoccupations over conventional forms.

"I'm simply trying to stay true to the visions that feel compelled to birth themselves through me and more align with my sense of purpose," she said. When I catch inspiration its never in a singular dimension, meaning, rarely does an idea come that wants to be expressed just as a song or just as a sculpture or just as an experience. The sculpture is a song or the song is a dance or it feels like people will be aided if i create a situation where they feel this, etc. The common formats for presenting expressions feels very constricting and so i'm doing the best I can to expand within the current structures. Most of the things I want to make don't even make sense to me yet, I think the technology isn't here yet for the things I'm being asked to do, but I have the sense VR is going to get me closer."

I asked about going beyond the simple intentions of "putting on a good show," and where that proclivity sprang from, in terms of a formative experience.

"When I was in high school and college, my boyfriend's Mom was a High Priestess in a Wiccan congregation. In that tradition every six weeks, aligned with occurrences in the natural world, gatherings are held to celebrate and commemorate. Everyone would bring food and wear clothing they felt sacred in. We would sing songs, drum and dance, open to spirit, create support for each other, honor ancestors... My art practice is very informed by this time of my life. For me art is the place where healing wisdom gets digested and offered back to the world. I think this a driving force for why I create, but to be honest, I feel like I don't actually know whats going on... At the end of my life maybe I'll be able to look back and have a better idea."

She said that a small and specific list of artists have had further influence upon her own process/approach. "When Tracy Chapman performs the quality of her presence feels like truth itself singing. This has always been a goal vocally. Fever Ray's live show influenced my understanding of how theatrical story telling can work as an extension of music performance."

Over the past year, vnesswolfchild has continued developing the immersive ritual aspect of her practice, often shifting the focus on crafting an experience, rather than being a performer. She's been performing regularly around Detroit, along with going on a couple of tours around the Midwest, the east coast, and down to New Orleans. She led a performative parade at the Broad Art Museum, participated in ceremonies at Burnside Farm and performed a two-day immersive sci-fi storytelling at Eaux Claires music festival in Wisconsin.

"So, within  the last year I have been able to grow into a more full version of who vnesswolfchild is and connect to others who are working in a similar way.  I'm excited for the upcoming performance at mocad because i'll be blending both ritual experience curation with performance in a sculptural installation. This feels like another step toward the full expression of vnesswolfchild..."