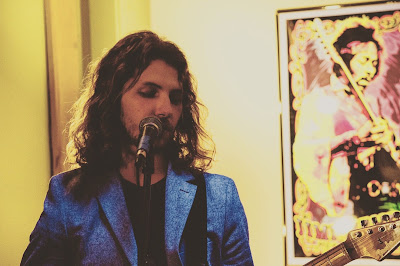 Jemmi Hazeman creates a gliding kinda groove on this debut album, Kozmic Maze. Bouyant guitar phrases are given a dazzling effect, producing spacey, "cosmic" sounds as they're threded through curvy coiling riffs. The soundscape has a sustained splash of serotonin and lush vibes, the kind of arrangements that are eager to carry you away with caprice, rather than snap, crackle, riff as insistentily into your senses as some indie-pop may attempt...and those guitars are set to launch into swelled crescendos through many of the song's resplendent bridges, always keenly woven around the buzzy midrange croon of Hazeman's lead vocals. There's a lot of character and expressiveness to the playing--and the time and care taken to craft it all together shows: Hazeman, otherwise known as Jeff Yateman, has been working on these songs in his home studio for more than a year, placing himself at each instrument on the record, and then mixing it all together in the production process.

Yateman worked on similar refreshing takes to pop with the dreamy-surf/intricate progressions he brought to the songwriting table of the band Shady Groves. A song like "Oh Well" stands out to me, blending the whimsical riffs of British Invasion and paisley neo-psychedelia with an
extraterrestrial/theremin-like effect to a melody line that soars along a set of minor keys that give it a curious kind of angst, as though the instrument itself is anxious for the adventurousness suggested by the velocity of its aural contours but yet knows its necessary to keep advancing...

Or am I listening too close? I think that's what's best about this album - is that it offers you the chance to cue in on any sonic element or melodic evocation that catches your ear, however specific or detached... Because once you get to the title track, and the variety of timbres and tones wash over you, like the series of mini-solos conveying across it, you'll wanna call this modern/post/neo-prog, and maybe that's what it is... But what it really is is aptly described by Hazeman... "The Kozmic Maze could be considered a metaphor for Life Itself, or: An expansive, spiraling journey into the existential musings & melodic consciousness of Jemmi Hazeman." Because, at the end of the day, this is an alter-ego. And that makes music, and this music, a means of opening a gateway to that alter-consciousness. 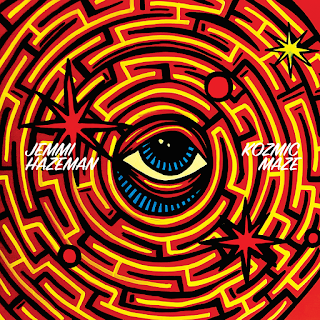