The Good Things About Your Potential New GoverNerd 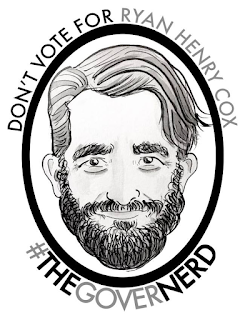 Ryan Henry Cox is a musician. He’s also a sports trainer, teacher, intermediate philosopher, tutor, and a father; he’s many things. But he’s also running for Governor of Michigan this year. I’ve written about Ryan in the past, regarding his band, the Good Things. The Good Things are/is just Cox, at least in the compositional/creation/recording stages. If and when (and emphasis on “if”) The Good Things ever perform, he assembles a capable crew of versatile musicians to help bring his clattery-but-charismatic “fractured pop” stories of melody and melodrama to life.

In fact, while Ryan is busying himself with an ambitious run for the Governorship, he’s getting ready to release an epic, (and emphasis on epic) album called Defeats The Porpoise, an intricately realized serial-adventure style concept album pop opera imbued heavily with spaghetti western grit, compelling magical realism and polychromatic comic book whimsy…

That being said, I’m talking about an album of songs, but it is, as you’ll hear later on this summer, so much more. A fleet of unconventional or eccentric instruments, some of them underutilized in the “indie-rock” realms and some of them actually invented or fused together out of necessity, so it’ll wind up sounding like a sun-splashed baroque-pop album of chimes, strings, hums, croons and various other characterful intonations.

But about a month ago, I picked Ryan’s brain as he gets ready to dig in for four considerably intense months of his DIY campaign. As you can see by his poster, he has no intention to actually win or even make his way into pack with other frontrunners. For him, it’s about creating a unique kind of impact. Or sort of an inception, if you will…, a change of the narrative.

Do you know if this is going to be worth it?
I don’t know that it will be worth it. I only know that it COULD be worth it, and that is enough to try for…But you’re going to notice that some themes in Defeats The Porpoise connect directly to my campaign. The idea of taking something on that’s way bigger than you, out of concern for others, and not caring if I’m likely to ‘fail.’

I wonder if you chose to name your band “The Good Things” because you, as a candidate, have this drive to bridge disparate and entrenched factions and see “the good in everyone…”
I wear my brain on my sleeve, I guess…It’s not optimism—optimism can be easily deluded. I’m more of a realist. There is good in everyone. That isn’t optimistic, it’s real. I don’t need optimism to find good things. ‘What matters in the end’ is a guiding principal in my life, now. How will I feel about  myself based on my history, while living in my ‘death bed.’ If I were reading my biography, would I see myself as someone worth being, someone worth having in the world?

And things are still going alright, running as an Independent?
Of course! Running for a party would ‘defeat the porpoise…’ as it were…. But that is bittersweet. Because it’s kind of incredible how many people of how many different backgrounds have found me and are reaching out with their stories and worries…But, after starting this campaign, it’s much clearer to me now how badly our state wants to keep Independents out of office.

The laces are a bit double-knotted, in terms of parties entrenched against each other. You’re one voice entering a big room of two warring sides yelling at each other.
Yep, that’s why I shut up and listen, first and foremost. People tend to be more patient and their minds a bit more open when you carefully and courteously listen to them first, listen to them sincerely, and then respond. I can’t come out swinging, or people just hide behind party lines and assumptions. But even more fundamental to the system, our campaign laws are stacked against Independents, and promote candidates of the  major parites. I have no chance of winning in “traditional terms,” but I’ll still “win….” I already am winning, in a sense.

And we would presume to ask the Independent what their goal or end-game is, or whether they think they even have a chance, and if not, why bother….People might read a paragraph about you and make premature conclusions about you.
That’s politics in a nutshell. Try to change minds that are certain they won’t change in attempt to influence society. Entering politics at this level and standing apart from the parties has a sort of an emotionally masochistic aspect to it—I know I’ll mostly just get beat down and pushed around or ignored in all of this. But sacrifice is key to worthy achievements.

Is the goal to shift the collective mindset? Change the conversation? Open minds to the overlooked issues?
Definitely. But far from the main goal. That's more of a theme, I suppose. A politician better have some practical goals to pair with any conceptual/inspiration/general intentions. Anyone can say, "I stand with everyone. I stand for [insert anything and everything.]" But that doesn’t mean anything if they can't tell you the solution that they are standing behind.

How do you approach the beast of cynicism? The presupposition that every politician wants something to gain with the job
My slogan is "Don't Vote for Ryan Cox"… Kind of knocks presuppositions off balance. And the question I ask most is, "What do you think we should do?" Then I shut up and listen again. That usually sets up a pretty level playing field for a deeper, friendlier, and more productive conversation.

Do you feel a kinship with the wave of ...for lack of any other word...progressive... candidates that we've seen rise in a post Bernie/Trump era?  I'm thinking of the percentage of women, persons of color and even Trans candidates coming to the fore….did it spring from that, similarly, for you? This calling? This cultural moment? This imperative, of sorts
Yes, but not because they are progressive...The kinship comes from their willingness to accept the (often incredibly ironic) challenges that come with trying to help others who are suspicious of your intentions; the willingness to be insulted and despised in order to help those same people. To be honest, I am quite miserable much of the time during this campaign. This is emotionally tumultuous, isolating and lonely, straining mentally and physically, stretching my intelligence and waking hours to my limits.

Seeing others take the same stand knowing they cannot "win" but still may do great things to better the lives of others...yeah, there is kinship there? Or what about just breaking down a platform? You’ll often see candidates whittle their platform down to a catchy motto… But it never suggests why they’re running. Why are you running?
I'm running because I don't feel I am doing enough to achieve my life goals. If you know me personally, you know that I've been making massive strides to improve all aspects that I think are subpar in myself in order to achieve my most desired goals. One of those is to dedicate my life to helping others and leaving the world in a better state than I came into it. Yes, trying to engage with people at differing interest levels, differing perspectives, and differing attention spans has been tricky!

You’ve got a website up….
Yes, and you can see that all of my Policy Reports are written in 3 ways:
1. a simple breakdown at the top of the page of the basic concepts and suggested solutions regarding an issue or issue set (for those who just want a quick overview of that platform perspective and for those who are interested enough to stop at the website, but not about to read a 5 page report!)
2. A more substantial summarization section that brings up more explanations, solutions, and context
3. A full report on a legislative idea with sources and comprehensive explanations (this is more for journalists, political researchers, nerds like myself, other politicians to steal, etc)
And each one has a catch phrase….

You can find out more about Ryan Henry Cox’s run for Governor of Michigan HERE
Follow The Good Things on Facebook, here.