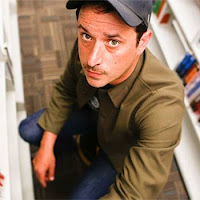 An Interview with Josh Malerman Unbury Carol
Josh Malerman and I climbed into the attic of a library and turned all the lights off.

The interview you’re about to read finds us in pitch black darkness, speaking our answers and questions out into the ether and unable to see each other’s expressions. Malerman is a nationally-celebrated author of horror novels, and recently nominated for the Bram Stoker Prize. So obviously I wanted to evoke a creepy kind of ambiance to elevate the energy of a conversation concerning the horror genre.

Malerman’s next novel is called Unbury Carol. Carol is a weary but compassionate hardscrabble woman who has a gruesome secret—she is prone to severe spells that send her into a comatose state so deep that she appears to be dead beyond doubt. She has fallen into these death-like states sporadically throughout her life, depending on a very small number of people to keep this knowledge and enlist them as protectors, in a sense, against anyone getting the wrong idea and fast tracking a hasty funeral....

....Oh, but what if someone close to her betrays this confidence? What happens after she doesn’t wake up? And, as she falls through an ethereal plain that none of us can imagine glimpsing, how, if at all, might she extricate herself from an animated darkness. What of the townsfolk? What of the treacherous Trail that connects a series of small towns, towns rife with superstitious people and rattled by a culture of Outlaws. Who will be an ally to a woman appearing to be dead?

“But I wanted to remove the damsel in distress formula from it,” said Malerman. His breakout novel, 2014’s Bird Box, found a similarly weary but very resolute woman as the main protagonist, courageously ferrying her two four-year-old children up a river with their eyes requiring to be shielded from a world stalked by supernatural creatures. That story will be adapted into a motion picture later this year, starring Sandra Bullock and Sarah Paulson. Unbury Carol, however, invites readers to follow the title character across the threshold of this mortal coil, and into a vividly-imagined underworld where her earthly senses are still engaged on both sides of the veil, as it were… She can hear the voices of whoever’s trying to bury her, which means she can also eavesdrop on news that a former lover, a famous outlaw, might be heading her way…

“But I realized, after doing research on actual carnival performers who would bury themselves alive and escape, that I really wanted the onus to be on Carol to try to survive this. So, what if it has to come down to her figuring out how to get out of this alive? Whether she does or not, you have to read the book…”

But a famous outlaw known as James Moxie is on his way…for whatever good that might do. He springs himself into action when he hears that Carol, the love of his life, is in peril. That being so, it was Moxie who, several years earlier, abandoned Carol; he just couldn’t deal with being emotionally involved with a woman who, every few months, appeared to die for a day or longer….

The horror aspects of Unbury Carol come with contemplating what happens when we die…or “appear” to die. How do you save your mortal soul when you can’t move a muscle? What if you’re at the mercy of the morals of those around you? And can any of us comprehend the possibility of something appearing to be magic, or even witchcraft, manifesting itself so as to be verified by your own eyes but presenting itself without any other graspable explanation.

Your brain might automatically ascribe certain tropes and time periods to the story, but nothing is specified. What is specified is that “it’s a superstitious age, where Moxie can become a legend through word of mouth because of a trick that he performed, to where (an antagonist) would fear him because of that ‘legend.’” One man who doesn’t fear Moxie is a rival outlaw, a monster of a man known as Smoke. Those plotting to literally put Carol into a plot have hired the perfidious Smoke to catch up to Moxie and keep him from interfering.

The chase is on, as it were. Or it’s a race. A journey. A hunt. It’s a mode of tension that Malerman has become excellent at affecting—with Bird Box taking us up the river, or 2016’s Black Mad Wheel involving an odyssey through a desert, or the short stories of Goblin finding characters following or seeking out the sources of various obsessions or urban legends or whatever else might have cast a spell upon them. Carol is on a journey back from the dead, just as Smoke is on a dark journey to snuff out Moxie.

“(The journeys) are a natural tension builder. It almost says to you—that the further (the characters) go into the journey, the deeper they’ll go into the horror. Chapter by chapter you can feel it. Each chapter doesn’t have to out-freak the freaky chapter before it. It doesn’t have to rush to the high notes of the piano, it can drop back for a bass note here or there, but I want to always keep it rising as they go along the way to the end.”

But just as Moxie has to fend off Smoke, Carol will have her hands full, even in a deathlike state, with fending off a villain of her own while she’s “under,” and that’s a wraithlike entity, given chilling personality by Malerman, that he names Rot. “I started to see, as I started writing, a woman who is super strong and interesting and knowledgeable, but…happens to have this … condition.” So, you’ll just have to read it to see if and how Carol can outwit rot!

Suffice to say, scare-wise, Carol contains what could be some of the most frightening, but also imaginative and vividly rendered imagery in any of Malerman’s work so far. “I’ve been asked before: do you scare yourself?’ Well, I can tend to have some freaky dreams now and then. But, typically, as a writer, my answer is that if you can see the scare coming, then it isn’t that scary, right? But really, I was just rewriting a short story of mine and I got to a point where I felt legitimate chills. That’s the greatest feeling in the world. How can you pull that off?”

But writing about a character who’s carried into a coffin against her will?

“.....Let me put it to you this way,” Malerman says, “I have since told Allison (Laakko, artist and partner-in-life-and-imagination-with-Malerman) that I want to be buried above ground…with no embalming fluid, and my casket unlocked, in a mausoleum if need be….you can even lock the gate, I’ll happily get out and scream for a groundskeeper. I mean, (researching this) really did a number on me. I don’t wanna be underground!” 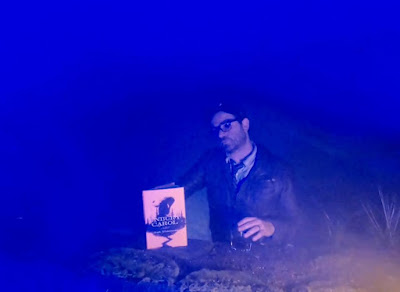 Find more info about Josh Malerman HERE
And read about the release party for Unbury Carol HERE
Posted by jeff milo at 4:33 PM