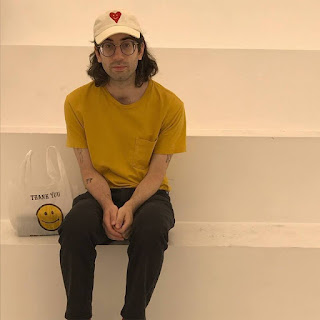 
Local singer/songwriter/producer Jonathan Franco creates a sound that's chill, but heady... cerebral, but somnambulistic..., an aural evocation of it being somehow sunny and foggy out at the same time. On his new single, "Transition Lens," Franco's remaking the sonic capacity of the instruments he uses by measured manipulations of tone and timbre and splicing in field recordings from the natural world and reprocessing the otherwise mundane into something phantasmagoric.

The lyrical and instrumental motifs verge on something like a mental diary, or a transcribed timetable of conversations, errands, encounters and daily experiences with his friends or in solitude--be they remarkable or not--capturing the subtly surreal human experience of a nearly 2019-world. For inspiration, he channels other icons who have capably rendered quiet profundity into tapestries of equal sweetness and stark/haunting noise--like Mount Eerie, Yo La Tango, and Sparklehorse. But, as he was completing his forthcoming album, Swimming Alone Around The Room, he was also influenced by the visuals of films directors who create comparably odd-yet-everyday portraits that unpack the metaphysical nature of being.

Once you get your ears around the album, you'll find that his transfixing and garbled half-whisper/gliding falsetto vocals will also be detailing fictitious occurrences or give voice to characters other than himself. And, of course, it should also be said that Franco is a visual artist--and for as much detail as he's trying to weave into these post-modern shoegaze lullabies, he's also trying to give you the same kind of pause, the same kind of detachment from your daily disquiet and allow you to sort of fall into these songs the same way you'd fall in, for a stint, into a glossy stare deep into the canvas of a painting.

I remember a brief stint DJing for WCBN and digging through their stacked shelves--uncovering treasures like 1999's Don't Wake Me Up by the Microphones, or even older gems like Young Marble Giants. Brilliant but minimalist suites that were stitched up with love and an embrace of the strange, with poetic lyrics humming through distorted vocal effects. I'm feeling that same kind of eureka when I listen to Franco--albeit 20 years after the fact of those name drops in my anecdote. The sentiments are still as vibrant, the quirky-bliss and pensive swoon is still triggered...and I want those cymbals to get louder... "I hope this moment never ends..."