The song starts and it's all thrill and alarm. I love the urgency of a Savage Seven song because it evokes the sense that you're breathlessly outrunning a fire that's following a spilt trail of gasoline after you down a dark empty desert highway. Oh, and the moon is blood red and reanimated/rotting hands are puncturing the gravel to lurch their way back up above ground.

Their live performance effectively communicates the throttling, slick, subversive nature of their composite of surf-punk, hard rock and psychobilly. But the LP they put out in early 2017 also makes the gritty-grim pastiche palpable with cover art depicting a faint moon being blacked out by encroaching gnarly branches. The songs on I Cut Loose In The Zone are angular, fast-tempo and fierce ballads that instill a bit of the mighty moxie you'd need to fight your way out of a nightmare in the astral plane and back to stable (or more stable) ground.

Nicholas Mancuso (vocals), Steve Thoel (guitar), Joe Sausser (bass) and Jon Stepnitz (drums) returned to Zach Shipps' R.V. Audio Lab to forge their latest album, and it comes out early next month. I remember the first time seeing Savage Seven...it was the kind of experience where you take five or six steps back as they surge through their first song. And with each successive song you make those six steps up by moving back closer...weirdly enticed by the frenetic energy and voluminous performance... If things get really out of hand (or go as planned?), then they're might even be some moshing...

I spoke with Mancuso and Sausser this week about that energy, and about the new album...

Let me ask a vague question... what is it that you appreciate most about rock n roll? There's always a primary element or character to certain genres, be it metal, druggy-psych, poppy-indie, new-wave, whatever... But what I love about Savage Seven is that it combines surf's slick reverb with hard-rock/metal's rhythms and psychobilly's dark theatricality... And I love the theatricality of Roadside Burial. Can you talk about that, about what the key ingredients are that go into your songs?
Nicholas Mancuso:   Rock n Roll - just the term itself conjures wild fire in my mind. It has those same primal qualities to me.  The fun part is containing that feeling within several minutes of music.  Key ingredients to our songs - insidious narrative, unhinged guitar, powerfully mean bass, thoughtful and tight drumming.

The Savage Seven seem like the band that would come to your average attempt at a Halloween Party and kick everything up 10 notches to where it needs to be, ghoulishness-wise..., If Cut Loose has an overarching thesis statement or theme tying it together what would it be?
NM:   I Cut Loose in the Zone - is almost like a war cry for this band.  Unlike a lot of other horror-centric bands out there, we don’t sugar coat or oversaturate our tales of terror.  We want you to dance and feel wild and in the moment, but still feel the goosebumps.  To still feel in the midst of a supernatural calamity.  There is always an opportunity to find that balance, where your audience is partying and having a great time, but cant shake that tinge of the strange, dark, and uncertain.  I Cut Loose… is an homage to the wild open road, where all manner of creatures both stygian and surreal, may or may not grab hold of you. 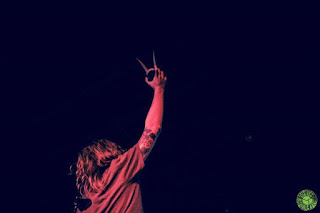 What is the song creation process like? I'm curious to hear how you guys find your ways toward tunes that sound sinister but cool...spooky (scary even) but slick...a song like Roadside Burial. I'm curious to know if the music inspires the lyrics or the lyrics inspire the music?
NM:  On this new record, Joe and Steve both brought riffs to the table, and songs were built around those riffs.  The three of them - Jon, Joe, and Steve - have arranged and performed music together since the early 2000s, under a variety of guises.

The Savage Seven was birthed in 2008 when Jon introduced me to the group.  The song creation process for us is very organic, which is simply indicative of our experience together and our personalities.  In general, I’d say the music inspires the lyrics.  Some songs just feel a certain way to me....
How about 'Roadside Burial...'?
NM:  ... I knew Roadside Burial would be about a traffic stop gone wrong pretty much the first time I heard Joe’s riffs, however, the lyrics themselves did not appear until a few nights before we hit the studio.  The songs themselves seem to almost whisper to me.  My background is in storytelling; I graduated from Columbia College in 2005 with a major in Fiction Writing.  All my life I have told horror stories.  I was the five year old that wouldn’t shut up about Freddy Krueger.  Our last album centered around baddies doing bad things in the woods, and the things that go bump in the night - be it camp counselors or folkloric demons.  On this new record, we really wanted to take things out of the forest and onto the road - like a VW bus full of deranged devil cultists and hapless victims, burning rubber and waving across lanes of traffic with no regard for anything or anyone.  Having a strong theme really helped catapult my mind and the lyrics themselves into the space they needed to be.

Joe Sausser:  We talked about basic theme of the record when we really started pushing on the songwriting, and so in that way the lyrical themes definitely shaped the music. We all knew this one was going to shift in tone to the heavier side of the psychedelic influences, and the nastier/grittier side of the punk influence.


Anything memorable from the recording experience? Or specifics about the way you approached it? What was it like working with Shipps again?

Jon Stepnitz:  Besides Zach being an awesome guy and talented musician he is also a fantastic engineer and producer. He speaks his mind and gives great advice, but still lets you do your thing. I love the awesome drum sound I get from such a small space. I drool over all of the sweet vintage mics he uses too.
NM   Recording with Zach is a best case scenario situation for our band.  We recorded the last album at RV Audio Lab, and he has a keen sense of how each of us operates best in studio.  Working with Zach is very efficient but also still playful.  He remains open to on the fly ideas, and is comfortable giving us his immediate insight as well.  Zach has seen us perform live and has a strong grasp on who we are and what we do as the Savage Seven.


How did this experience compare with the last record?
Joe  Our last record was the combination of 3 different 1-2 day sessions over a year or so. This time we booked a whole week at RV Audio lab to hopefully make it sound more cohesive. We tried to get as much of the instruments done live/together as possible. I think that’s a key to capturing the energy we’re trying to put into the songs. I think we were more successful this time around in those aspects.  We gave ourselves more time to get guitar/bass tones exactly how we wanted them. Jon nailed his parts in one day which was astounding because we finished writing one of the songs the day before. Oh, so did Nick. they both basically did each song in 1-2 takes.  And yeah, Zach is the best! He knows all his equipment so well, there’s almost no down time. Nicest dude and extremely talented recording engineer/producer.


Future plans after the album release?
NM  We will be booking locally through the Winter, and hitting the road in 2019 to promote the album.  We also plan to celebrate the ten year anniversary of our self released debut, a cassette single of the track ‘I Wanna Luv,’ which included a cover of Charles Manson’s ‘Ego’ on the B side.