Augusta Rose / Bigabite on the next Podcast Episode 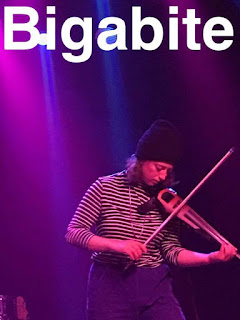 Once a month, I invite a musician, artist, producer, or any kind of creative person into the recording space of my cohost, Chad Stocker, so that we can have a sort of atypical interview, one that's not tethered to the formulas commonly structuring "profiles" in newspapers, magazines, or blogs. I get that this is precisely what podcasts are for, but it's damned refreshing to select one member from a band..., say, Augusta Rose, from Double Winter..., and invite her on to talk about anything and everything, free of specifics and no pressure to promote a new release or plug an upcoming concert. I get to record me asking the kinds of questions that I usually serve up before and after my tape recorder is on for an ostensible freelance assignment.


Beyond that, it's a great chance to hear a musician (Chad) asking another musician (in this case, Augusta,) questions..., and those are questions that you're average "music journalist" won't always come up with. It's an opportunity for musicians to talk to each other beyond just the 2-3 minutes that they can squeeze in as they're passing each other on a stage, in a venue, swapping amps and pedal boards between sets during a loud, bustling weekend evening.

I'm looking forward to sharing this next episode, where Chad and I had a conversation with Augusta Rose. I would have never otherwise been able to get such an intimate portrait of her as a musician and as an advocate for social justice causes and an ever-more inclusive arts and music community. She plays violin in a rock band--so that, in itself, is a fun jumping off point. But in this forthcoming episode, you get to hear about how she's been trained in several forms of styles and disciplines, as well as the three of us getting philosophical on the mind-expanding depths of experimental/improvisational/drone-heavy music. We talk about stage fright, about the emotions that go into the experience of making music (as well as writing about it), and, inevitably, we talk about gear!