Theatre Bizarre Orchestra & Satori Circus - 'These Are My Friends' 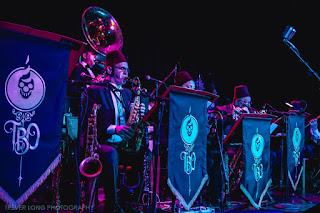 The Theatre Bizarre Orchestra are a lively bunch that shine brightest around this time of year. The masterful ensemble of jazz specialists formed several years ago as the house band for the famous Masquerade that gave them their name, combining their talents in and proclivities toward big-band, swing, and Dixieland with a bit of a mabacre charm. Their latest album was released this past Friday, when they assembled for the astonishingly sleek and sublime Gala party to kick off the Theatre Bizarre festival of performances.

I'm sharing a sample of my personal favorite song, here. These Are My Friends unites the Theatre Bizarre Orchestra with another mainstay of this year's Halloween mega party, the inimitable performance artist (and singer) Satori Circus. The multifaceted Satori came from the worlds of rock, glam, punk and new-wave, but donned some provocative face makeup and several costumes in the 90s and again in the 2000s to transform into a bit of a neo-operatic vaudeville persona. The level of his theatricality fits perfectly with the atmospheric arrangements of TBO. It's a fantastic collaboration that springs from and flourishes out the potential of a previous recording (the title track) and slides into the vim and vigor of curly-swirly new material with a wow and a flutter.

They've chosen a few jazz covers for this album (Sheik of Araby, Let's Misbehave) that perfectly fit the red-eye-winking, slight-mustache-twirling character of the Theatre Bizarre Orchestra - a bit exotic, a bit dreamlike, a bit naughty, but ever eloquent in execution. Toe tappers, hip-shakers, head-swivelers and maybe even a bit of jumping, jiving and basket-whipping dance moves for good measure - this album awakens your fun loving spirit as well as tugging on your heartstrings for a few vocal ballads.

The album is available on CD as well as a digital download through iTunes, Amazon and CD Baby. The Theatre Bizarre Orchestra will be back at the Theatre Bizarre Gala for weekend # 2--where you'll also likely encounter Satori!