Echo Fest "will showcase what we believe to be five of the best echo-, delay-, and psych- bands Detroit has to offer, with mind-bending visuals all night and sweet psych music between sets."

From the first interview I ever 'conducted' with psych-power-trio known as Sisters of Your Sunshine Vapor (back to the days of Sik-Sik Nation), they already had started musing on the potential, and the begrudged under-the-radar restriction to the activities, accomplishments, and camaraderie of the SE-Michigan-area's Psychedelic Scene.

We've had our garage thing. We had our space pop thing. Even our electro-dance thing. Now, they've put together something to comemorate the psyche-thing with a handful of bands from the area: Fur., Electric Lions, Solar Temple Cult (formerly Friends of Dennis Wilson), and 800-Beloved, join the Sisters on July 17 at the Lager House.

"We named it Echo Fest to celebrate all the bands in Detroit that use heavy reverb and delay in their songwriting," Sisters bassist Eric Oppitz said. "There were a few more bands that we would have loved to include, but the sheer logistics would have made it impossible to book everyone on the same date."

It works out though, Oppitz said, because each band can get a full set, plus, they can always "hold the event again next year with a totally fresh line up."

Electric Lions singer/guitarist Rabeah Ltief (who also recently joined Solar Temple Cult) has shared a few philosophical conversations with Oblisk singer/guitarist Asim Akhtar, regarding psychedelic as a "genre" or "classification." He stressed that it is based in pure feeling - anything providing a quasi-natural "high" from an aural effect, be it echo, reverb or distortion, has the spirit of psychedelic music. 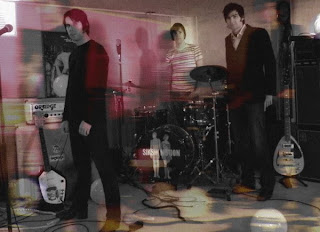 Sisters of Your Sunshine Vapor have their albums up for free download at their site.

Go (Widescreen) from 800beloved on Vimeo.