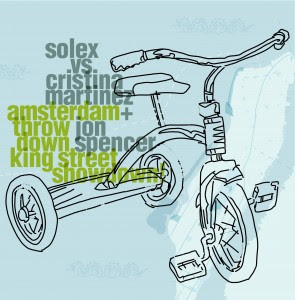 Jon Spencer Blues Explosion - punk, rockabilly, Delta, New York, funk, soul, garage, detonated disco and disembowled grunge - spiny to the touch and spicy to the taste - after their two decades-long jarring journey, it goes without saying that all these sensiblities were piflered and stirred together by these refined, disaffected, left-field flying musical mutants into a new, devestatingly iconoclastic blend of the blues.
When no one could hang any fitting classification of all the moods and movements rattled above, Spencer himself spewed in his bendy twanging rustbelt croon that, in fact, "The Blues is # 1" - clarifying, "I don't play no blues - I play rock n roll." Gotta be careful with these things. Because the bottom line remains, that, still, "the blues is number one..."
And - starting in early 2010 - Spencer, with his longtime mates Judah Bauer and Russell Simins, linked up with Majordomo (part of Shout Factory) to start a reissue campaign of digitally mastered material spanning their career's worth of albums and adding in a bevy of b-sides, rarities and live recordings.

After early spring's debut of Dirty Shirt Rock n Roll: The First Ten Years - they've moved onto their post-Orange material by re-unveiling 1996's Now I Got Worry--recorded between down in the heart of the Delta with blues aristocrat R.L. Burnside, funk/soul aristocrat Rufus Thomas and electro/hip-hop aristocrat Money Mark. You get 12 bonus b-sides on this one... (info)

This year, they followed that with the 1997 rare live album Controversial Negro - originally just a promo here in the states that quickly went out of print, this is a 1996 show from Tuscon AZ that offers four previously unreleased live songs. (Also featuring 12 more live songs from a 1994 show at the same Tuscon venue... -info-
But the latest of the latest Jon Spencer news (besides their July 16 Crofoot show with Duende, in Pontiac MI), involves a new recording project where he and his wife, Cristina Martinez (who, with Spencer, helmed the shambled frightful blues punk of Pussy Galore) are gracefully stomping and grinding their heels, howls and spilt-out strum storms over the eclectic musical visions of celebrated Netherlands' singer/songcrafter Solex (Elisabeth Esselink).

Hip/hop in its driving beat, sample-heavy nature, but ranging from dirty garage, to groove-heavy soul, to rattled krautrock, to brass-blown, string sawed bridges between funk grandeur and classic pop melody musing. The experimental Solex, known for her wide range of taste and quirky, electronica-leaning pop's strut, lays many a strange drum-n-bass dominant platter for Spencer and Martinez to mold and explode together - the results of which being a very freeform, here-n-there head spinner of a spaced out funk odyssey, often too intriguing or perhaps suspensful (in its: what instrument will they bring in next and what meandering riff will they spread with it) to necessarily set a straight dancey, or head-bobbing vibe between soul or hip/hop, but still highly rewarding in that it'll likely be one of the more unique albums (or, musical conversations) released this year.
Here's a Tiny Mix Tapes interview from March - with Jon Spencer
More info from Bronze Rat
Maybe this will explain something:
Posted by jeff milo at 5:18 AM