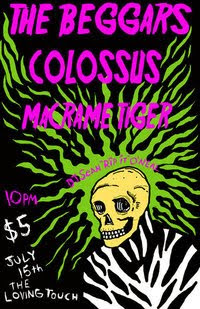 Build your endurance. Up your intake of vitamins and minerals - and echinacea tea... (and, maaaybe not Kombucha)... But - if one plans on surviving the whirl of late-ish bar nights with loud music blaring and the cruel enticement of the waiting bar and it's varied sordid spirits combined with your early morning clock-ins to the assorted day-jobs - then you're going to need a plan.

Naps in the break room? Or balance that delusion of "functioning alcoholic" during the night hours with "functioning zombie" during the preceding day hours.
Tuesday Night - Richie and Carrie realign to host "Tuesdays In The Forest" at the Loving Touch pool hall in Ferndale. Show up at ten - for drink specials - a DJ (with Ritchie) spinning all night - and a performance from Josh Epstein of the Silent Years and Dale Earnhardt Jr. Jr...(the latter of said-two projects has an EP on the horizon, open up your ears).

Thursday Night - still....again...in Ferndale, now back at the Loving Touch - anthemic bash balladeers The Beggars are joining with the kaleidoscope-space-pop collective Macrame Tiger (filmed above during one of the inaugeral New Center Park parties) and welcoming NC-based metal band Colossus.
If that's not enough - Jon Spencer fucking Blues Explosion is coming to town (er, Pontiac) on Friday night - with Duende.
And then... 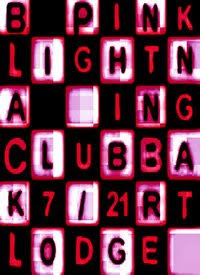 next Wednesday Night - 7/21 - still in Ferndale - over at Club Bart - the Loco Gnosis Presents series brings Pink Lightning and Black Lodge up to the very cozy, triangular, over-the-bar stage. The latter of said-two bands is welcoming Eric Dilworth (of Isles of E.S.P.) on guitar.
Naps!
Oh, and there's things Saturday - more on that soon...
I'm going to bed.
Posted by jeff milo at 5:21 PM