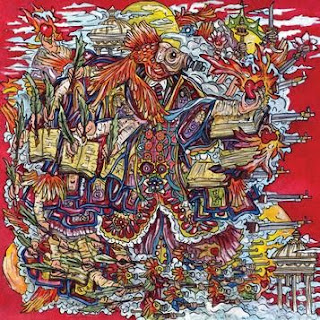 Remember when fans still got upset about selling out, or changing styles/sounds?

Athens-based disco-dashed-pop-nebuloids Of Montreal have accelerated, twirled, and contorted way beyond their first flirtations into beat-driven fuzz-frayed realms back in the early 00’s (Sunlandic Twins) and have since dived into dark, moody grooves (Hissing Fauna, Are You the Destroyer?) and catapulted into heady and ravenously libidinous, strutting, deconstructed soul (Skeletal Lamping).

Is it even anything, any real shock or drama, anymore, when the once “vaudevillian lo-fi psychedelic pop thing” heads into a lavishly equipped studio (Ocean Way) in Los Angeles with its prolific mastermind Kevin Barnes breaking his solo-home-production precedent and laying his songs upon the aural accentuating operating table of Grammy-nominated Kanye West co-producer Jon Brion, whilst also continuing to flourish his (Barnes’) public display of mutual admiration (via collaboration) with head-spinning space-pop soulstress Janelle Monáe and then invite a duet with R&B popstar (and famous little sibling) Solange (Knowles)? 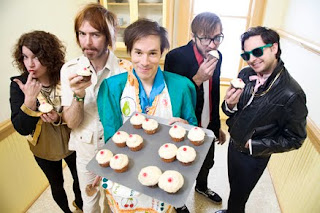 Such is part of the forthcoming False Priest’s recipe. Remembering a dozen years prior to Barnes’ early penning of cutely-quirked pop, “I just happened to start doing that when I first started putting out records.” He had been writing songs since age 14. “It’s like there’s a division between those two worlds. But I don’t really think of myself as one or the other. I don’t think I’d be defying myself to make a folky record, I’m totally open to do whatever I feel like doing. If somebody got upset because I changed directions it wouldn’t really bother me, because it would be like: ‘Okay, well, then, don’t listen to it.’”

Fauna, though heavily electronic, triggered considerable acclaim, while Skeletal’s alter-ego nightmarish opera was cast as labyrinthine. Priest is a bit more immediate, still dazzled and wrung with spiny surfy guitar dressings and gracefully intertwining cerebral sci-fi conjuring lyrics, but it seems to slide, seems more palatable, more playful; dark and biting still, but no longer haunted. “All the stuff I do is complex, I rarely write a 3-chord song. So, Skeletal Lamping was maybe a bit more fragmented and schizophrenic; I would take fragments of songs and piece them together to create something new. With False Priest I guess arrangements are slightly more linear in a way but it’s not really straightforward dance-pop.”

Compositionally, Barnes said he was “influenced by the same certain things I’ve been influenced by in the last three to four years: soul music, 70’s funk and r&b, things like that and then trying to create something that is interesting on a musical level but also interesting on an intellectual level, for the lyrics. It also is fun and immediate; it’s kind of the thing I always try to do – something that has immediacy but also has layers so it’s not just a one dimensional experience.”

It’s mid July and Barnes has just returned from putting the last touches on Priest in L.A., back to his family’s ethereal home planet, “Sunlandia” before heading our way for Jackson’s Land of Nod Experiment. The band (Bryan Poole, Dottie Alexander, Davey Pierce, Clayton Rychlik) have been holding creative meetings with Barnes and his brother David regarding the ambitious, reality-melting new incarnation of their live show. 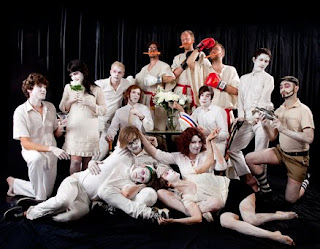 “We’ve done a lot of theatrical things the last couple tours,” Barnes said, “and the Skeletal Lamping tour was by far the biggest production we’d ever attempted. But it got kind of exhausting towards the end; it became a bit mundane because it was like the same thing every single night. We want to keep a level of spontaneity so the theatrical aspect of the tour can evolve as well. We’re gonna do a thing where they’ll be two or three layers to the performance and the band is gonna be bathed in this mysterious light; we’re gonna figure out a way where the musicians are sort of involved as part of the stage and the stage is a living organism, the performers are sort of living inside of that world. Everything is live too, which is another thing that was sort of detrimental on the Skeletal Lamping tour, we had a lot of backing tracks that dictated the tempo and the length and everybody was following that. If you follow a computer it’s always going to be the same. We’re trying to give the musicians a lot of freedom; I’m actually not going to be playing guitar very much at all.”

“The idea would be this invisible wall between us and the audience, almost like we sort of existed in this parallel universe and we have a sense of them and they’re with us, watching us and listening too, but it wouldn’t necessarily be us interfacing with the audience in that traditional sense. It would be more like we exist in this dream world – like the relationship you have with your dreams; you’re sort of experiencing on all these levels but you can’t change it, you are at the mercy of the fate of the dream.”

The band won’t be able to pull off the dream vision for the Land of Nod (the outdoors is just not conducive to the stage lightning) but will feature new band members: Phayer on piano and synth and Nicholas (of Sugar and Gold) on synth and bass. Of Montreal will align with Janelle Monae in the fall for a duel-tour that will incorporate the “dream wall” and have the two bands meld into each other’s performances, breaking down any set changing pauses.

Monáe and her crew of contributing artists/musicians, the Wondaland Arts Society, have served as Barnes greatest inspiration over the last year, spurring him to new inspiration and “wanting to create something interesting. I always had, with David (Barnes, brother) and Nina (Barnes, wife) but it’s always great to branch out and bring more people into the family. Hanging out with them, sending them songs, getting their feedback and collaborating with them was such an exceptional thing for me. I started listening to Janelle’s record (ArchAndroid) and knowing all the time, the energy and heart and sweat that they put into that and seeing how much they love it and seeing how much they care about it is really inspiring. (ArchAndroid) meant so much to them, they invested so much—emotionally, spiritually, intellectually, into that record and so to see people who care that much about their art, or anything that they do, is always extremely inspiring.”

False Priest Out this Fall on Polyvinyl.

I saw of Montreal at Land of Nod and I was completely blown away by their performance. You really did feel like they were interacting with us like music gods. Kevin Barnes is a born performer, with style leaking out of every pore of his body. It was beautiful how much passion they feel as performers and musicians. It's the passion that makes it a real experience.