Interview with The Soil & The Sun: The Broad Spectrum…The Wide Range 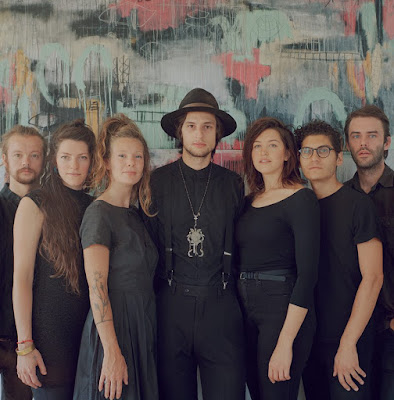 Some bands write pop songs. Some write punk songs. And, some write songs that just sound cool. Others rap, and others dance, others reinvent disco while the rest try blending techno trance to trip-hop, or whatever.

But, a few bands, particularly Grand Rapids-based Soil & The Sun, can widen the gaze, strike sonorous, cinematic chords, cast a complex and pastoral instrumental assemblage;  evoking, inside the span of their 6-minute epics, the exhilaration o f the outdoors, the elegance of an old dusty theatre and the transcendence of a dream draping you across the stratosphere, all in one song… And those songs span the cathartic percussive trounce and guitar shred of rock to the sweeping strings and choral vocal arrangements of baroque revivalists, there’s sanguine surges of pop and more cerebral glides into atmospheric electronica…

I mean, there’s just a lot going on here…

“The spectrum is pretty broad, coming from seven very different people,” says frontman and co-founder Alex McGrath. “That’s why you hear a wide range of ideas in our music.”

The way he explains it, with both simplicity and yet a bit of mystery, is that the Soil & The Sun, after seven years of germination, are “…ultimately, trying to find that thing that only we can do…
”
McGrath and drummer Benjamin-Baker Jackson were the seeds of this soil. They were playing music together since mid 2000’s at college (Olivet Nazarine University, IL.), but moved to Grand Rapids to, eventually, start up a coffee shop with some friends. They eventually convinced friends from college, musicians they’d already known or played with previously, to join them in Grand Rapids and properly form the Soil & The Sun.

The group has attained a notable amount of acclaim and attention from several blogs, sites and zines from across the country. Last year’s ambitious and invigorating double album Meridian won them a Best Of What’s Next title from Paste Magazine.

Soil & The Sun recently wrapped up a major US tour as the supporting act for From Indian Lake and Lemolo. They’ll be performing at The Blind Pig on June 6.

The group also features Ashley McGrath, Michael Newsted, Kellen Kerwin, Joanna Perry and Jacki Warren, with songs adorned by their finely matched harmonies and instruments ranging from electric bass to oboes, accordions to cellos, violins to electric guitars. And then there are those stirring lyrics…


The song “World We Used To Know,” both lyrically and instrumentally, strikes me with this deep sense for the metaphysical. How does that influence the sounds you create and the songs you write?
McGrath: I am personally very drawn to the mystical.  Having grown up mostly in church has influenced that, for sure.  I feel like it’s important to collect as much information as possible, but in the end it’s the experience that I’m after… which is somewhat elusive for me.  Interest the spiritual journey is definitely what drives most f the lyrical content of our songs.  Now, the veil between spiritual and natural is, well, less than thin, I’d say.  The two worlds are always overlaying and overlapping one another.  So, I think experiences in the “natural” and “spiritual” worlds are pretty synonymous with each other (whether we acknowledge it or not).

Have you guys been working on anything during or between these past couple tours? Are you ever able to write from the road?
Writing on the road is not really something we have been able to do.  I think we’re just in a different mindset.  It’s more like a time of gathering information and inspiration for us.  Lately, we’ve been working on developing some ideas – hoping to put something together soon.

After several years and all the touring you’ve done, is it like a technique or an artform for you now? How do you keep your momentum and, more importantly, keep your ensemble all together and consistently enthused?
Certain aspects of touring can feel formulate and become routine; like the long drives or the quest for decent coffee or ‘What time is load in?’ and ‘When do we need to leave…?’ ‘Who has the van keys?’ …But, even without those mundane things, sometimes there are exciting surprises, like, “Wow, it’s 6:30 p.m. and I just realized that I haven’t had any water yet today!”  I think we each get reenergized in our own ways.  Finding personal space is important and also impossible.  Personally, I like to take walks.  Connecting to something outside of the band can be grounding.  Also, a good show / performance is a powerful thing and can easily overcome any of the difficulties of being on the road, which is good, because that’s kind of the point.

It seems like, these days, so many bands have to tour constantly just to sustain themselves. I was going to ask, earlier, what you love most about being in this band, but maybe I should ask what you love most about touring, since those things can go hand-in-hand with a band’s existence, or its evolution, or…its survival, really…
Having the opportunity to play music every night is a dream, but there are a lot of other neat things about touring as well.  It’s a pretty unique way to travel and see the U.S., similar to an AP class in high school – you move through the content really quickly and then connect the dots in a different way, but the details become a little blurry.  Time feels different when you’re moving fast.  I like that.  It’s a nice break from regular time.

Something I like about being in this band… well, everyone has this willingness to be a member of the team.  I’m not sure if you could be a touring band and stay a band for very long without that.  Can I be sincere really quick…?  I get to do the thing I want to do most with people who I really love.  That’s my favorite part.  Ok, don’t make me say that again – I’ve been trying to suppress my emotions more, save it for the songs, ya know?  Yes, I think touring your brains out in definitely the most obvious way to keep a band afloat.  It’s not for everyone, though.  I’m interested in other ways to make a living as a musician, like having a hit song or writing jingles.


Meridian sounds so…epic. Like an achievement… What led to that record’s formation or, basically, what would you consider the group’s most formative moment? Something that really spurred you forward without looking back.
Probably eating tacos together near the end of 2013… That’s when we made the decision to attempt to do the band “full time” for one whole year.  We made it through the year, and ever since then we’ve been more determined to push ourselves to be better musicians and artists.  It’s ok to take yourself seriously sometimes.

You’ll play the Blind Pig on June 6…but what happens after that? What’s the future hold?
We’ll be spending most of the summer months at home in Grand Rapids.  We just moved into a house together, so that’s a big change that we’re getting used to.  I’m looking forward to developing some ideas we’ve been working on for a while.  Hopefully, we’ll be back out on the road this fall.