Santiparro (VIDEO) "The Benefit Of Confrontation" featuring Will Oldham 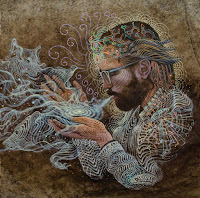 Earlier in the year I interviewed singer/songwriter Alan Scheurman about his newest album, released under his recently adopted moniker Santiparro.

It was posted in two parts (here and here) via The Ann Arbor Current, online. His journey, spiritually and musically, over the last 5-6 years is intriguing and insightful, particularly the moment where the iconic indie-folk mystic Will Oldham looks him in the eye and instills the last needed shunt of inspiration for him to eventually go off into the wilderness and begin recording inside a cabin... The results of which were True Prayer.

This week, Santiparro released the first music video from the album...

Director: Ben Dickinson
Posted by jeff milo at 5:17 AM