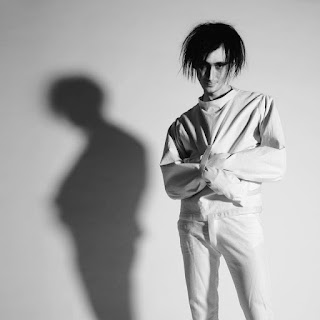 Friday June 19
Julian Paaige releases The Right Kind Of Crazy A Masquerade and an Album Release Show hosted at The UFO Factory
ft. an experimental set by Sienna Rise (with Marcie Bolan and Phil Skarich)
9 PM  -  $7  (gets you a mask and a CD)


...creep folk...creep garage... creep pop... Julian Paaige has reclaimed that off-putting word, mixing it into a precious and enticing sort of decoupage to gloss upon a range of genres, and embodying its original essence... as something that was a bit weirder than weird, something you couldn't pin down, something that hooks you but you can't say why...

"Creep pop just means me, inside..." said Paaige. "The songs come straight from me. If people ask me to describe it I just say it's my insides coming out, trying to put the emotion almost three-dimensional into a song, so it's though you're right there."

The Right Kind Of Crazy has the instrumentation (organs, pianos, acoustic guitars) of a folk record, but it's wonderfully wrung into an outlandish realm of punk-slung theater passionately belted by a half-crooning, half-yowling minstrel-type. "Duel For Two" has the reverb rumble of surf-rock shuffling in at its opening but it mutates into something more sinister sounding through its punching verses, eventually sweetening (in tone and tempo) into a buoyant throwback-pop ditty in its chorus (albeit with vocals that kiss you with strychnine-smudges on its lips). And so, why is it so enticing to listen to...? It's almost creepy...

"I guess I'm just a dark romantic..." Paaige said. Because, at the end of the day, however eccentric his vision might be, these are still love songs...pop songs, really... 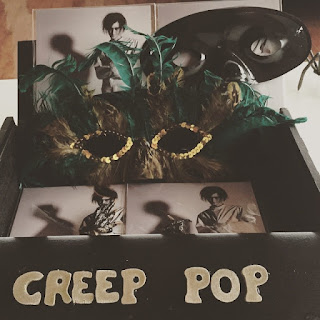 And however strange his take, it still speaks to something primal inside of us...setting his songs to a catchy beat or swayed to an emotive melody, Paaige is rendering his only-slightly-twisted skew on the lovelorn singersongwriter trope.

Paaige recorded these songs with musician George Friend. "It was at his house in Southfield. My guitar amp was in his kids room and drums were in the living room... I'm proud and I do feel like I've grown from the last album. But, I still feel I have lots to improve upon..."

What's striking, what's so catchy...that is...is probably the purity of these songs. They're simple, to the point... What's so creep about that...?? It's just the right kind of crazy...