Above^ ...dig the new video for Detroit-based punk collective The Armed's "Paradise Day," a single from their Untitled debut album. The Armed's songs are buzzsaw blurs that bludgeon together elements of early 80's hardcore, thrash, pure punk, extreme metal and whole other kind of unique mutation.

This short film showcases the acting chops of Trevor Naud (singer/guitarist from Zoos Of Berlin), embodying a wiry and weird office worker who apparently has a lot of steam to blow off...bwo a karaokee session in which he essentially channels the intense energy of The Armed's music upon a modest stage, forceful enough to fizz up the vigor of every attendee in the room...

You wanna check out more of Untitled's voracious cycloning conniptious cacophonies...? Just go over to their bandcamp. The group recorded with Kurt Ballou (Converge) at his God City Studios (with Baptists' drummer Nick Yacyshyn sitting in with them). The Armed's Untitled, via
No Rest Until Ruin records, will be thunderously celebrated with a release show in Detroit this Friday at The Majestic Cafe. 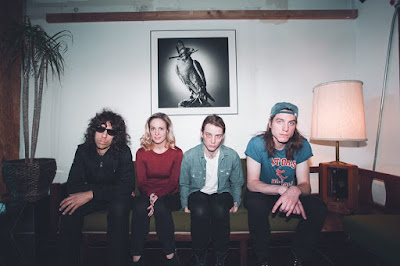