Eddie Logix - 'Why Would You Splash Me?' 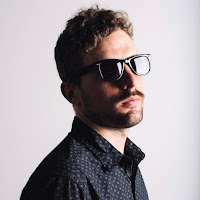 Eddie Logix just unveiled a new beat tape called Why Would You Splash Me. Logix is a producer/emcee who's been honing his knack for taut composites of spacey jazz, cinematic soul and future funk over the last decade.

While he may have made his early marks on the local scene primarily in the realms of hip-hop, he's since diversified his musical modes to meld a signature swath of ambient electronica that demonstrates an adventurous mind for arranging complex rhythmic patterns with atmospheric drones, frenetic flashes of melody, and propulsive bass.

Logix is making his case as a potential future soundtrack composer, as "Cold Sweat" could easily fit as a b-side to a Blade Runner sequence. But "Large Freeze" is in a whole other zone, cultivating a pulsing bass and an urgent kind of beat that blends trance-like dance with a hi-hat crashing march, recalling a kind of Shigeto-esque vibe. Elsewhere, he's not afraid to get a bit weird, noisy or disjointed with "Fish Faces," and later he's bringing in some swooning pianos and chimes over one of the slickest beats of the bunch with "Appetite." He employs found sounds and spoken-word samples throughout, most strikingly on the closer, "Young Birds From a Truck." And while his voice becomes garbled, one word cuts through to the top, for me... "drum..." The drum is incessant; the perpetual flow of the spirit, the heartbeat, the pulse, the progression... The final track fades away into an ellipses, and we're left to wait for Logix' next 24 tracks...