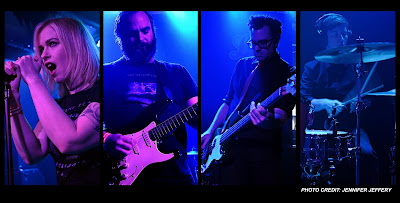 We are bound to our darker sides. It's not so much physically as we are emotionally... It's like a twin we might not show the outside world, one that's been toughened by the tumult of relationships, the encroaching of self-doubt or the dread of world events. Whatever it is, Siamese tap into it, lyrically and sonically, and what results in "Host" is the manifestation of coming through the otherside, back into a world of light and oxygen and other people, but bringing with it a cold wisdom from freshly healed wounds.

Perhaps a less graceful but still apt metaphor would be that of a boxer getting a rematch. Siamese feel and sound like a contender coming back into the ring of focused ferocity, unphased by the black eye they might bare, marching in, uppercutting and K.O.-ing some grievous opponent with one punch. That said, it's also a sleek composite of post-grunge grit, spacey electronica and melodic new-wave.

The release party for "Host" is on Friday, July 27, at The Loving Touch. The video for its lead single, "Tarrare,"premiered today via popmatters.

For more info on the filmmaking team behind this video, check out Obscura Broadcasting.....

Back to Siamese
From the get go, "Host" brings the band to a position of an earned vindication. There comes a point where our stronger side comes out, often in response to a prior wrong and that's just what keyboarist (lead singer) Johanna Champagne's lyrics and emotive vocals are bringing to the fore. "If I want it //I'll get it," she belts on Tarrare, with this scorched vocal effect. In other words, get out of her way!

Steve Thoel (guitar), Angie Kaiser (drums) and Eric Cojocari (bass) take that energy from the lyrics and, with Champagne, create a cathartic kind of alt-rock house music. While there are some ambient, slower ballads in between, several of the arrangements match that laser-like vigor of the vocals. Again, to put it less gracefully, several songs sound like they're already soundtracks to the best kind of Matrix-esque kung-fu sci-fi special-effects-splashed polychromatic climactic fight scene you could imagine!

But unlike badass fight scenes, the rhythm of these punches comes packed with way more substantive emotions. We are but a host to those emotions--and songs like the title track, as well as "Tarrare," allow for the proper expression and poise for expelling them--with maximally cathartic results.