The Blueflowers - 'Circus On Fire'

The Blueflowers are going to be featured in a forthcoming edition of  the Metro Times. Their latest album is available digitally, TODAY!!

The darkly-dreamy Americana-from-the-Outlands quintet are revamped with a lineup shuffle and some fresh ideas coming into the collaborative songwriting process.  I'm eager for everyone to read the piece, featuring an interview with singer Kate Hinote and guitarist Tony Hamera...

Here's a music video of the lead single from their forthcoming album, Circus On Fire


...But what you won't get to read in the article are a few thoughts shared by singer/songwriter Hinote, here in this sort of preview feature...


I've known Kate for more than six years now, and I was curious to hear about their experience of sustaining and expanding a band and working as independent musicians in this unpredictable Internet-dominated landscape...

Kate Hinote: As far as the hustle and sustaining the band, I certainly think it’s easier than ever to promote our band, but it’s easier than ever for everyone, making it harder to get noticed and have people engaged.  I find this endlessly challenging and always admire the creative ways people come up with to make the most of the tools we have available to us. The ability to connect with people through these platforms is going to continue to evolve, no doubt, and it seems we’re just kind of along for the ride.  Due to our general life circumstances, we’re going to once again be figuring out ways to promote our album without a tour, which still seems to be the thing to do to really get the music out there.

Kate Hinote: We’re going to have to get creative with social media, but will also do very traditional album promo and just mail out a disc and hope some people on the other end not only take the time to listen, but that it grabs them enough to want others to hear it. That still hasn’t changed. However we get the song to someone’s ears, it only spreads if they like it enough to want others to hear it. In that sense, it’s all the same.

I regretted not being able to share these in the article. But I wanted to include them here, because it's an experience (and a struggle) that I think lots (if not all) independent artists can identify with... 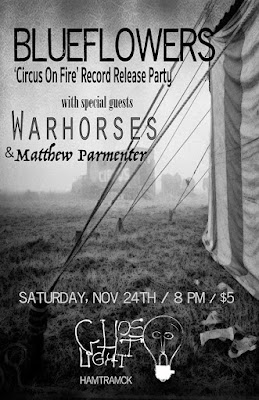 That said, we can now look ahead to the Blueflowers' Album Release Party on November 24th

Kate Hinote: I had Matthew Parmenter on an acoustic showcase I put together a couple of summers ago and was blown away by his voice and intensity.  That art and  theatrical element he will bring to the start of the night is perfect for the kind of show we want to have. Warhorses is very vibey and atmospheric, lots of fuzz too. We’re so excited to be back at Ghost Light Hamtramck for this show. Our favorite show last year was on that stage and they have been great in letting us make the night what we want it to be.

And while you're here, you might want to check out (not only the full album, streaming,) but my own personal favorite track, demonstrating the brave stylistic leaps and bounds of the album in terms of the Blueflowers canon.
Posted by jeff milo at 9:57 AM