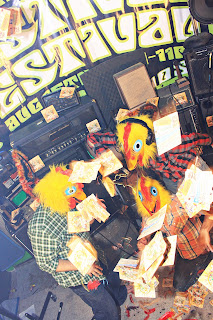 Two years ago on a perfect summer day that exploded into torrential thunderstorms, Eric Ackerman invited 17 bands onto his farm to play the inaugural Aestival Festival. The academically trained recording engineer has welcomed 400 bands and counting into his former RV garage studio since settling in rural Armada Township; (“You can be as loud as you want” Acerkman said, “up there”). If you’re yard has 18-acres, why not throw a festival to celebrate all your clients?

Ackerman (from Macomb), with Justin Prante (of Mt. Clemens) and Ron Raring Jr (of Rochester Hills/Fraser) are collaborating on the third such Aestivalis (Latin for summer) celebration, set for Aug 6th and 7th at 28 and Gratiot in Lenox Township. Prante, a musician, grew up perennially playing in bands but also brings experience in event production with years’ worth working in haunted attraction production. Waring Jr is a lifelong friend of Ackerman who brings experience in carpentry, IT and project management. 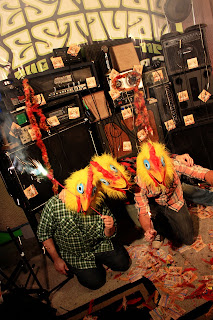 Put together: a producer working with hundreds of local bands, a musician who knows how to direct events and a carpenter savvy in telecommunications and you’ve pretty much got the booking, the logistics and even the self-built light-strewn stage anyone would need for an exceptional DIY/homegrown music festival! Aestival 3 features Marco Polio & the New Vaccines, The Nerve, Macrame Tiger, Lay of the Cid, Matt Jones & the Reconstruction, Tone & Niche and many more, including Detroit Flyhouse, Satori Circus, Dixon’s Violin, Double Moon Bellydancing, art venders, a beer tent and more!

Unlike year one, where Ackerman and Nerve drummer Steven Gamburd welcomed hundreds onto Ackerman’s home (with Waring Jr commendably helping parking lot surveillance) or year two where the masses again sweated out the sounds on the hottest day of the year with melted interactive murals spilling onto Ackerman’s grass – this year will move to a new location, propped by sponsors and span two full days of entertainment.

Ackerman and Prante as dual producers with event manager Waring Jr, form Audiomite Productions – named for Ackerman’s studio and genesis for their DIY-foray into publicity, production, networking and live music facilitations. Year one was “an experiment,” Ackerman said, “an opportunity to bring some of the best groups I worked on together. It’s amazing how it works, how everybody ties on, they get to meet each other and you realize everybody can help each other out, they just gotta meet and develop relationships. It started by people that wanted to have something good to take with them later in life and remember back on.”

Prante was in the ICU for year one, having “his jaw sewn back on,” resulting from a roller blading crash. Prante and Ackerman had just become fast friends that 2008-summer, ironically with Acerkman’s response to Prante’s craiglist ad for “a strictly platonic roller-blading buddy.” Year one climaxed in storms (fortuitously extinguishing a fire-breather’s ill-aimed spew onto some flammable brush) with the Nerve jamming rain speckled on Ackerman’s deck.

Year two, armed with valuable volunteers, reaffirmed the trio’s confidence in approach and management and pushed them to get their gears turning for “year 3” way back in December 09. “We saw the impact of what we could do (in year 2),” Ackerman said. “What worked (the first two years) we added onto,” said Prante, “and what didn’t, we cut out. And, it just made sense, this year, to actually do a free show!” 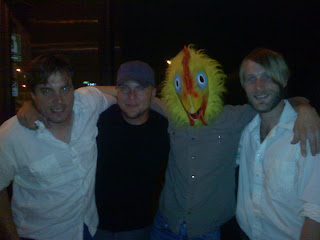