Of Mice and Musicians 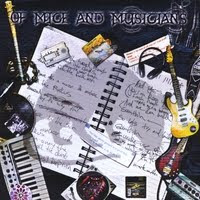 This Detroit-based sextet galvanizes alternative rap's capabilities to wring in much more than the archetypal hip/hop ingredients: tight, swaggering beats and samples under circuitous scrawls of swiftly spat rhymes; a live drum-kits hollow pounded punch provides more oomph and a bit of a primal intimacy; their are the usual samples, from swirling flutes to tightly drawn trumpet whines but instead of coming off ostentatious or tired like some of the mainstream radio stuff, it leans more towards the nuanced, surreal ambiences of found in the sediments of the underground, from the indie-space-funk functionality of Mos Def (the wavy bass and rock beat of "Rent$"), to the darker, guitar and synth laden scrawls of an Aesop Rock ("Soul Like A Mole/Getaway") or a more vitriolic El-P ("Angel") or the spaghetti-western feeling intro into some noir-ish shadowed alley strut of "Sorry My Mom Called" with it's bouyant lyrics over sparse percussion through verses while it builds, the drums fill in more and the turntable scratches slide along dynamically.
Vocals fluctuate from fast and biting, to slower harmony-focused choruses that show a sensibility for syllable stretching; the beats are tight, the live guitars bring plenty of funk and the bass is soulful. While hip/hop at it's core, it blends enough genres to be accessible to a wide arc, from rock to R&B.
Find 'em on Sonicbids or Facebook
Posted by jeff milo at 7:06 AM