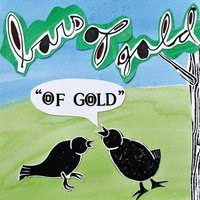 
Graceful, gritty, valiant – Bars of Gold master a balance between soft-n-smooth to the rolling-n-thunderous –

Their first proper full length is a fibrous, bawl blasted post-punk production that’s wiry enough to throw some hard juking knees and elbows into any fray but glossed with an endearment of quieter croons and tight, spiny guitar sunrays that dance down over muscular, jazz-jolted drum barrages. It spans varying moods of grungy grandeur, noise-rock peekaboo cartwheels to barely-held in-place post-hardcore transmogrifications, all flexed into an initially bewilderingly, anthemic hurrah.

See: - the deliciously panoramic, up and down, dreamy rock ballad "…" (actual title, or "Civil War") with its patient, pensive guitars waving up and diving down over an about-to-trip-over-itself marching drum surge, until it breaks away for muted handclaps and off-mic acapella in low burly flannelled voices from all five men. Next, a banjo starts beautifully flitting around the space under a precious moment where vocals show off a melodiousness and are not belted in a bark to compete with the storming guitars, bending bass and occasional synths.

The intertwining guitars and seizing rhythms are key; the sound was honed while the four instrumentalists worked in Detroit as Wildcatting, 'till now, burgeoning with the tornado whirled, belt and bravado of Bear Vs Shark’s former frontman on vocals.

Mandolins waveringly wail in a blur over the most single-ready anthem "Birds" while the banjos set a groove over a devastating drum stomp on the epic "the Hustle"; throaty vocals span anti-consumerism, to avian enthusiasts to the show-stopping, slow-building, album closing ballad of being born "Cannibals."