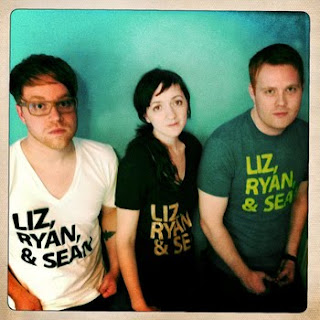 it's over now, it's in the past...
don't count the sands in the hour glass
let's fill it up, let's make it last...
We're still fast........
The arc of the Friendly Foes existence seemed sped-up...similar to the swiftly spat anthemic lyrics' recounting on this final recorded entry's "Still Fast" (listen here). It jettisoned out strongly, these songs having gestated as singer/guitarist Ryan Allen's non-Thunderbirds-Are-Now-pennings, and by the end of summer 08 they had an full length debut of commendable indie-tinged power-pop beauties, with Born Radical. But a year or so in, as they were already working on a follow up EP, their drummer, Brad Elliott, departed and they welcomed Sean Sommers (of The Cold Wave) in...while bassist Liz Wittman (also of Kiddo) started writing and singing more (and, also, developing her own primary writing project, Lettercamp). Another EP, more shows, more festivals, all in a year's time; and soon Allen is joining the Cold Wave full time. And through the spring and summer, they prepped 4 new songs for this digital (limited print run) release. All this in less than 3 years. And now they break up.
'Break-up' can be a severe term, usually reserved for more bad-blood type situations; the Stone Temple Pilots break up, Van Halen breaks up, messy things like that. While this appears amacable, (and, natural...bands and scenes and songs all come and go), this, still, in a way, seems like a type of 'break-up' album, but not in a romantic or even necessarily friendship sense, just a reflection, a revved up, guitar soaring, hard-pounding requiem...a hook-filled heavy hearted look-back at their adventures.
It's story-book-ish or photo-album-ish in that way - but still heartening. "We were there to know we tried / now it's time to say goodbye." A sort of affirmation, that we were there, and it meant something.
No matter what - we have this.
And you can have this - Liz, Ryan & Sean - via their bandcamp download. They had 50-limited copies at their farewell show (via the Fucking Awesome Fest) - if there's any left, I would haunt the merch tables at any forthcoming Cold Wave or Lettercamp shows to see what you can find...
Posted by jeff milo at 4:09 PM