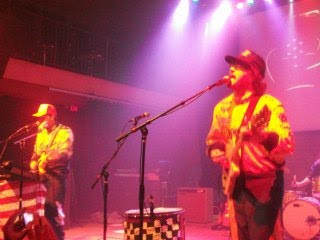 Read the Real Detroit interview with Dale Earnhardt Jr Jr - as part of said pub's 'hot issue' - crowning them hot band. (...the original draft of which did not include the potentially edgier phrase 'dance their asses off') The duo consists of Josh Epstein (also of the Silent Years) and Daniel Zott (also of The Great Fiction ...and also another, newer band...)
The latter of those bands parenthetically referenced, The Victorious Secrets, successfully stepped to the top of the heap o' bands competing to be the new spokes-band for FreeCreditScore.com - Read the story from the Detroit Free Press. Here's the video. Here's their site.
Not that the old 1991 concept of 'hitting the big time' still holds today but - if the rest of the world finally decides to discover our local pop-writing hero, Mr. Zott, -at this point, -after 13 years of TGF... and - after that commercial... well, then, there's likely to be a few brows raised...
> A credit-website commercial jingle + > a band named (slightly altered) for a Nascar racer...
But it works. 1991 be damned.
That's all covered in the DEJJ interview - read more.
Posted by jeff milo at 6:27 AM