Even so, this four-headed beast has consistently kept its hoofs galloping, constantly releasing singles, 7” splits, EPs and even super-sized EPs, whilst constantly touring across the country every other month and even hosting Michigan’s own burgeoning metal music fest, Berserker, (every year, the first weekend of March). A handful of blogs streamed the entirety of Negative Noise in the weeks following its digital drop (and you can hear more if you click this word…), but we’ve also got its lead single streaming below, right after the proceeding paragraph...

This weekend, Child Bite, with singer/guitarist Shawn Knight, bassist Sean Clancy, guitarist Brandon Sczomak and drummer Jeff Kraus, will perform at two celebratory release parties around their hometown (info at the bottom of this article). Meanwhile, I was able to pick Knight’s brain about a couple things, particularly the band’s recent 10-year-anniversary mark and its evolution from spazzed indie-pop, to anthemic mutant-rock, to its variations on thrash metal and grindcore, and to Negative Noise, which sounds like an uncannily balanced patchwork of all of those various elements and energies.


Ten years, Shawn...Let’s get nostalgic and introspective and explore how you feel about this band and how its changed, progressed… What aspects about the whole gamut of Child Bite experiences continue to make this fulfilling? What have you learned? What supernatural powers have you gained and mastered?

Shawn Knight: Since our first show was back in March 2006 at Hamtramck Blowout, our 10 year anniversary show was essentially at the last Berserker. We didn't make a big deal of it, but that's when it was. We considered revisiting some old songs and bringing up past band members, but honestly we just ran out of time.

As for our stylistic progression? I'm happy with it! What we did in the beginning made a lot of sense for the time, and what we each were into at the time. Since members have changed, our overlapping influences and tastes have also shifted. What we are doing now draws a lot more from the music I listened to as a teenager. I think that version of me would've liked this band.

I look at our path, and I see obvious parallels to bands like the Misfits, or even White Zombie. Shit happens. Get weird.

What keeps you going, most of all…?

I honestly don't know why I keep doing this. Some sort of undiagnosed compulsion I guess. I am obsessed with taking this thing as far as it can go; we all are. And I'm lucky to be supported by a few other fellows with the same mental disorder. So, you asked what I've learned…I’ve learned that if you stay true to yourself, your artistic vision that is, and put as much effort into realizing it in the best way possible, you'll have a lot less regrets. That's a big one. I feel like this dumb band gives my life purpose, just like other people do when they make a baby. It sounds like some inspirational horseshit... but it's actually true!

If nothing else, you guys never stop working. You’ve been constantly either touring or releasing something, but it’s been a while since you’ve had that proper “full length.” And, no matter how much music you put out, even if you put out a single a day for the full 365 days… there’s still a big-deal-eventfulness ascribed to the occasion of dropping a “full length” versus an EP. Can you talk about whether it feels that way, whether the labor pains were stronger this time, like the baby was much bigger…? (This metaphor’s getting messy…)

I agree. There is still an ingrained perception that full-length's are more worthy of attention than smaller releases. When I'm first experiencing a band that is new to me, I usually go for the newest OR most popular album. Really, our string of EPs was mostly due to band member issues. We didn't have a drummer at the time of Monomania, so we enlisted our buddy Moshe to do it as a one-off project. Vision Crimes was supposed to be a bunch of songs for future splits since we didn't know how long Ben Moore was gonna stick around, but they felt good together so we made that an EP. Strange Waste was our first release with current/forever drummer Jeff Kraus, and that was 'cause we were in a rush to get something out on our new label other than that batch of Anal Cunt songs.

So yeah, squeezing out this fully-cooked baby of a release is very much a bigger statement that will most likely make more of a lasting impression on any folks unfortunate enough to be paying attention. We will be playing these songs for a long time. We almost made it shorter to conform to current trends, but ended up agreeing that this thing deserved to be a '90s-style full-length.

He was great! He let us do our thing, and when he had ideas or opinions, he threw them out there. It was a little stressful having him sit directly behind me while recording vocals. Partially 'cause he was analyzing every line I uttered, and partially 'cause I didn't want to accidentally fart in his face.

The drumming is particularly intense on this one! I’m glad to hear the theremin roaring back in “Hog” and the roaring synth…or guitar…or whatever that is wrapping around the chorus of “Paralytic Phantasm” will delightfully haunt my dreams for months to come… So, could you share a bit about the nittier-gritter sides of the production experience? Which elements of your music were you guys aiming to particularly extreme-ify?

Jeff has always been a beast on the drums, and now that he has Sean, Brandon, and I forcing him to push it further and come up with even crazier rhythms, he is an altered beast. That mind-bending howl in "Paralytic Phantasm" is definitely Brandon on guitar. He took an old Korn riff, ran it through a $500 reverb pedal, and there you have it. "Born A Hog" does feature the return of the joystick. Phil wasn't impressed, but he didn't stop me either. Maybe he felt it was tainting our old-school hardcore record, but then recognized that it added that necessary Child Bite charm? You'd have to ask him.

Regarding what kind of record we were trying to make, definitely a raw one. The early Child Bite records were all about artistic production, whereas now we just want a record that sounds good & represents how we sound live. We kept the mix and the master pretty dark compared to most modern recordings. Phil said he wanted it to sound like My War/Slip It In-era Black Flag, but with the bass guitar turned up. How can you argue with that direction?

“Apex of Anxiety…” and singing about dying before “dementia” sets in… Intonations like these suggest to me a meditation upon how the post-Internet age we’re wriggling through has potentially/slowly injured our brains in a way… Could you share a little about your approach to lyrics and whether or not you have the audience in mind when you write? How important is sending a “message” through your lyrics…?

There's that whole "write what you know" saying that some smart fucker said a long time ago, so that's what I'm doing.

I figure I have to sing these damned songs night after night, I better put some craft and thought into the lyrics. These songs are just glimpses into my brain, wrong or right. Mostly wrong…, probably. My head hasn't felt screwed on straight for a little while now. Not trying to go all Psychopathic Records on ya, but I do honestly feel more unhinged, less stable than when I was younger. Not sure what's up with that. Regardless, I have opinions and fears just like every other Joe Schmo; that stuff makes it into the music.

I used to be a lot more abstract, but I think this slightly more direct approach feels right with our slightly more direct music. As for how important that it is that I'm sending out messages to impressionable listeners…? It's not really something that I consider. I'm also not being completely reckless, telling kids to sacrifice their little sister to Satan or glorifying illegal activity. I think it's all either putting a spotlight on subject matter that I feel is a little fucked up, or just working though my own issues for the sole purpose of entertaining others. If anything I've said helps anybody, that's awesome. On the contrary, if any of these lyrics have hurt anybody... …oops? 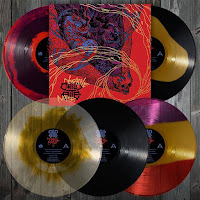 We just bought a new touring rig, so it's time to get out there & pay that sonofabitch off. Two record release shows in Detroit this weekend because we are A) ambitious, and B) gluttons for punishment. Touring Mexico, the U.S., and Canada all of May and June. Then more touring. Then…more!

Friday at The Majesticw/ Fuck You Pay Me (Cleveland), Ritual Howls, and Deadly Vipers4140 Woodward Ave, Detroit MI 48201Doors @ 8pmAll Ages$12 (this admission will get you tangible music rewards)
INFO

Saturday at The Sanctuary
w/ Shitfucker, Empathy, and Cheerleader5467 Moran St, Detroit MI 48211Doors @ 8pmAll Ages$12  (again, you get treats with the price of admission)
INFO
Posted by jeff milo at 10:39 AM