I'm not singing, I'm just talking to you: An Interview With Fred Thomas 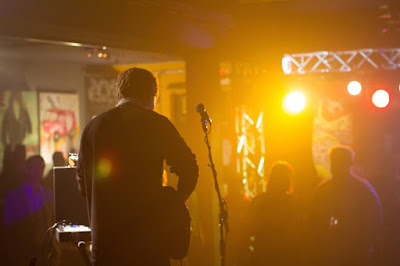 An Interview with Fred Thomas

Fred Thomas is coming home…, again. This is the second (or third?) time Thomas has been back in town since relocating to Montreal nine months ago. He’s probably not going to like that I’m about to call him brilliant, …but, the brilliant singer/songwriter/producer/unconfirmed-mystic /possible-philosopher, is performing at the UFO Factory in Corktown on Thursday night, the kickoff concert for a tour taking him out and about around the Great Lakes & east coast.

Thomas continues to serve as chief proprietor of the sweetly-sophisticated and charismatically-quirky chamber-pop outfit known as Saturday Looks Good To Me. But the songs currently stuck in most of our heads are things like “Bed Bugs” from 2015’s All Are Saved, a subdued showstopper of a solo eccentRock frayedFolk foray.

Even if I can’t call him brilliant, I’m close to pinning down why I’m often struck by his varied sonic incarnations, be it skewed-pop or ambient splays; Thomas sounds like a sonic tactician, someone who’s thought of every way a song (or a sound) could go, and sub-indexed it into the many ways those processes could wind up boring and then throws it all out the window. All that’s left after that, then, is the quantifiably marvelous materials… However crude or uncured, it winds up sounding curiously cool.

Fred makes mention of All Are Saved’s follow-up at the very end of this interview, but he and I are both hoping you’ll read the whole thing. Because not only does he tell you more about Stef Chura’s album (that he helped produce), but also the newest release from Hydropark. More than that, he shares thoughts about Minim, which is, more or less, directly related to whatever record he puts out next… 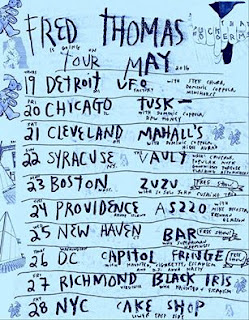 Fred, the first thing I’d like to hear from you is an imagining of what you would say if you were writing on the back of a post-card and sending it to us, back here in Detroit… What would you tell us of your new nest in Montreal, and the experience of working from there, now…?
When I first got to Montreal it felt so European and romantically aimless, but I'm realizing that it's a place and culture completely removed from anything else, really. A beautifully alien experience for someone who grew up in the States.... Everyone is super friendly but also kind of blunt and sharp, but hard to really pay attention to the people around you cause the place itself is so limitless.

How are you acclimating, creativity-wise? Or, in general? What’s the day to day been like? What’s the creative process been like? …We miss you! Do you miss us?
Day to day life in Montreal is fantastic, though yes, I do miss my friends a lot. There are a lot of really wonderful and creative folks in Montreal as well, but by no means am I trying to super-impose myself onto a new (much larger) town in the same way that I incrementally built a life in Michigan over the last many, many years. My French is awful and without a fluent mastery of French and English it's hard to find work, so I work on music, walk around and work remotely most days. The coffee is good to fantastic but the beer in Quebec is disgusting. 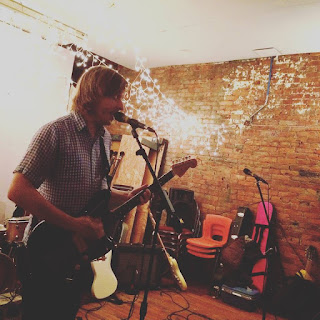 You’ve got a couple new things, music-wise, to talk about. One of them is Hydropark, an interesting Neu-ish sort of wavy-electro-Kraut-ish-noise-pop swirly slide. How does this music, and the recording experience of the latest batch of tunes, distinguish from any other or prior projects…?
Hydropark started in the spring of 2013 as a jammy synth thing with myself, Chuck Sipperley and Chad Pratt on drums. I would record our practices/jams and put out tapes of the best parts. In the fall of that year my friend Jason Lymangrover was living at my house and sat in with us on bass. It worked perfectly and we stuck to that lineup since. The album we just released took two years to compose, record, mix and master, just because so much of what we made came from these high energy jams we would then strive to re-create/remember.

What draws you to this kind of soundscape?
I love synth compositions, krautrock and the kosmiche sounds of all the bands that inspired Hydropark and it's a lot of fun to collaborate with really good friends on an update to that kind of jumpy instrumental stuff. Also it's another band I've been in where it sounds like everyone is just as high as possible and that's always funny to me since I have been substance free with the exception of alcohol for my entire life. 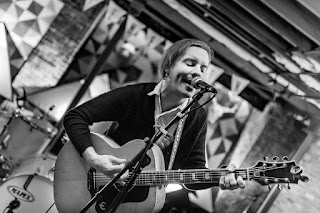 How would you describe Minim, the collection of 30 one-minute-long songs that you just recently released online? Beyond what it is…What did you find an experiment like that provided you, inspiration-wise?
Our first place in Montreal was what they call a "3 1/2", an extremely generous terminology for a studio apartment in a building downtown with 16 units. A fine place, but super thin walls and not a lot of space to set up for recording or making of noise. Most days I would just work on headphones on electronic or synth based stuff, quickly accruing a huge wealth of sketches, beats, ambient textures, etc. So, at the end of the fall I had hours and hours of this stuff, some of which was great but a lot was awful and certainly no one would willfully sit through the entire running time of. I decided to just take a minute from each of the better ones and throw them together, much like a slideshow or postcard series that ends before it can really get too boring, or too good or overstay its welcome in any way.

I’m surprised more artists don’t do more things like Minim. I mean, I know everyone experiments, drafts things out, and jams… But this is sort of like a public diary, or, a melodious kind of thinking-out-loud sort of escapade.
I feel like every artist needs an outside editor, so this was an exercise in some ways for me to just slash and burn my ideas in a random fashion, not getting too precious about how any of these sketches needed to unfold or be presented. In the end, it was better to apply a random limit than think too hard about carefully editing or arranging. 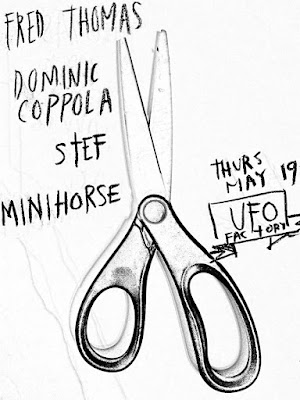 Stef Chura is on the lineup for your upcoming UFO Factory show. You worked with her on the album that she’s building up towards releasing later this year.
Yeah, I worked with Stef last year, recording and playing bass and some other stuff. She's a very precise and hyper-detail oriented songwriter. I know she's been working on her record a lot since I moved and touring, basically going for it and I'm sure it's going to be an enormous thing when the world finally can hear it.


And, I saw that the songs you recorded as a solo artist for Daytrotter wentup recently.
Yeah, I went by Daytrotter on the last day of a long tour just over a year ago and promptly forgot about it. Saturday Looks Good To Me had gone a few years earlier, but that was really my only other time being part of things. It was a great experience, but they do so very many sessions that it takes them a year to process one and they can't possibly put the amount of care and creative thought into each session that they did earlier on. I remember reading 1,000 word free flowing essays about Bon Iver or whoever when they started but I think they're working a little more under the gun these days.

Future plans? What has the last year’s worth of experiences and experimentation  equipped you with, wisdom wise, or outlook wise…?


I have a new album finished called "Changer". It's coming out on Polyvinyl at the start of next year and it encapsulates the huge life changes that have been happening for me since the start of last summer. These changes are reflected musically in a bigger shift towards headphone-derived electronics as I was mentioning above, but there's also a heavy lyrical approach that expands on what I started trying to say on "All Are Saved". Direct statements attempting to shed any sort of fears or posturing and just cut into the center of the apple. I'm touring for the rest of May and then all of July both solo and with Hydropark for a few shows. Failed Flowers also has our first vinyl release on the way and we're planning to do some shows locally and around the Midwest as well. One crazy summer!
Posted by jeff milo at 1:12 PM